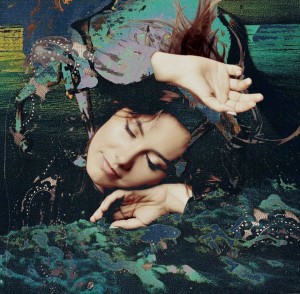 First things first Ella Hooper, how dare you have all of these brilliant songs up your sleeve and make us wait so long to hear them? Secondly, thank you for delivering the goods.

Most of us were probably introduced to Hooper when she was a teenager leading Killing Heidi to the top of the charts. If that’s the clearest image of her work that you can conjure up, you’ll most likely be surprised by her latest creation, In Tongues.

If you’ve been following Hooper’s mission to release her first solo album, you’ll know that it’s been a monster of a trek. To be fair, she has given us three singles to tide us over until now. They’ve all been delicious, don’t get me wrong – but it felt like a bit of a donkey and carrot situation for a while there. Finally, FINALLY, Ella Hooper has arrived.

Although she didn’t release ‘In Tongues’ as a single to get us familiar with her new sound, it’s an appropriate opener to the album. It’s a strong display of where she is at creatively and vocally. This one is a definite winner. Another standout is ‘Wild Stallionz’, which brings to mind the sounds of Elbow and The National.

Listening to ‘Low High’ and ‘Häxan’, it would seem that any traces of Killing Heidi have long been covered up. If you were expecting anthems of teen angst, either move along or enter with an open mind. If you’re looking to get nostalgic, try ‘The Red Shoes’ because that will surely be a highlight for fans of her early work.

If ‘Everything Was a Sign’ and ‘Last Rites’ haven’t won you over then I’m not really sure what else she could possibly do to convince you. These are some of the most emotionally intense moments on the album so brace yourselves for them.

Hooper has always been an exceptional vocalist, but the direction she has taken with In Tongues has allowed her to really flex that muscle. Her voice carries a story well and that’s a gift worth showing off. Now that she and her writing have matured, this album has given her the perfect chance to showcase that ability. It could be described as experimental, but the first of any project—solo or not—is always an experiment. This one worked out pretty well.

In Tongues makes it clear that Ella Hooper is here to make her mark as an individual. Let’s hope it’s not so long between drinks next time because it sounds like she’s got a lot to give.