album review: the upsidedown, the town with bad wiring 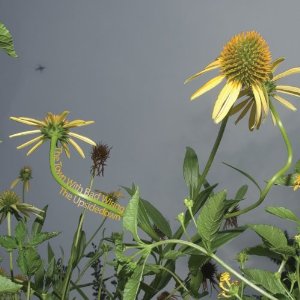 When I started listening to the Upsidedown’s The Town with Bad Wiring for this piece, I immediately thought of shoegazing. I often think that bands who pursue shoegaze music today are ridiculed for trying too hard to be ironic. The other classic criticism is that the music all sounds the same. This is generally true of any sound musical artist, but shoegaze music bears the brunt of the critique because the majority of the sound is low-fi and has a background-music element to it. But, I guess I’m a classicist in that I believe in shoegaze. The genre deserves more respect than that; it is a cornerstone in indie rock.

Luckily for Portland-based the Upsidedown, their expert combination of shoegaze, psychedelic 60s rock and blues is music to everyone’s ears. The band has had several songs appear on highly-rated television shows and are currently signed to the Dandy Warhols’ record label, Beat the World Records, as well as Reverb Records: the home of their newest release, The Town with Bad Wiring, released on 28 September.

The album progresses through multiple genres while still maintaining a shoegaze focus, which is both interesting and refreshing to hear. The first few songs, “Something Good,” “Your Sister’s Cool” and “La Paloma” really recall both the styling and the moodiness of bands like My Bloody Valentine and The Jesus and Mary Chain. With the mellow-but-rocking vibe, the incorporation of many different sounds, the partial instrumental breakdowns and the layered vocals, I could be in England in 1991.

The first major change in  the album occurs in title track “The Town with Bad Wiring” – there is an element of blues added to the typical mellow melodies and searing harmonies. Lead singer Jsun Atoms clearly speaks against a low-fi, musically complete background defined by guitar riffs and a steady beat, recalling early 60s psychedelic music.

The next two songs, “God’s Bare Hands” and “Wounded Knee” seem to be inspired from different musical scenes in the band’s native Pacific Northwest. “God’s Bare Hands” hearkens back to the Pacific Northwest alternative rock scene of the early 90s. This change reflects another shift in the band’s musical ability, which is amazing considering we’re only five songs deep on the album. “Wounded Knee” goes in yet another direction, stripping the background noise and leaving everything that makes shoegaze music so great: impeccable harmony, catchy riffs, simple tempo changes and lyrics that you just don’t get. This song borders into neo-folk while still maintaining the band’s sound.

The following track, “Hang On”, is my (and my roommate’s) favorite song on the album. It builds from the ground up, which is something I really appreciate because I’m so instrumentally inept and enjoy hearing how each instrument contributes to a song’s overall sound. The build-up gives “Hang On” an epic quality, which I would hope the band pursues more fervently in future work because it really showcases their talent and specialized style.

“Whiskey Boots of Snake” follows and  has a decidedly more bluesy tone. I love the blues and was surprised to hear this track on an album that was generally pretty quiet up to this point. The thumping bass, drum beat and harmonica add something to this song that isn’t there on the rest of the album. This song sticks out because it is pure rock ‘n’ roll. Atoms’s talking vocals only add to the badassness of the song. I can imagine this being awesome to see live.

The last five songs begin the descent back into shoegaze. However, there are rarities: “Spiders” is an exemplar of Tristan Evans’ talent both as a vocalist and a bassist, as her bass line gives the song a Little Miss Sunshine soundtrack quality. “Indio Bernice” has a 60s psychedelic and almost surf rock sound, with trumpet and choppy vocals to compliment a repetitive guitar-driven beat.  “Night Kissed” and “Katydid” are typical shoegaze tunes.

Admittedly, during the first listen-through, I had a hard time differentiating what makes this album special. I’m sure a lot of critics will review The Town with Bad Wiring and make the expected claims, but the music is inherently intelligent. It takes some work to understand why the genre needs to be appreciated and why this music is still relevant, but the work pays off. Stick with the Upsidedown as they take you through a journey and a bit of a history lesson; I promise it’s worth it.

One thought on “album review: the upsidedown, the town with bad wiring”