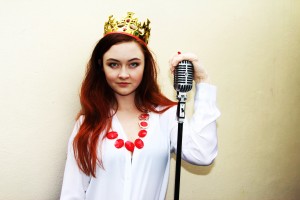 If you’re anything like me when it comes to talking 16th Century monarchs, I’m sure we’re all familiar with the glorified images provided to us by Hollywood and the likes. I just assume there’s a lot of velvet and feasting going on, mixed in with a whole bunch of inequality towards all minorities, specifically women.

So when I went to see Bobbie-Jean Henning in her new cabaret All Hail Me where she embodies the infamous Henry VIII as a rock-goddess, I was extremely intrigued to see how one woman was going to transport me into that world.

However once Henning took to the stage, I became immediately captured by her character. Claiming the space instantaneously with the gravitas and confidence necessary for such a loud persona, she drew the entire audience in. She literally demands your attention and does not give it back.

King Henry VIII is an icon most people are familiar with and have their own understanding of, but somehow Bobbie-Jean’s interpretation brings out a fresh side to the infamous tyrant.

Landing Henry somewhere between Geordie Shore and Mick Jagger, Henning launches her character into relevancy by playing on themes of gender without any aftertaste of the glaringly obvious. The shows subtlety and humour allow us to be carried through Henry’s timeline as he battles with being surrounded by women who don’t understand him, the pressure of baring an heir, pissing contests with the French. She presents us with the original FuqBoi, and it’s delicious.

Using a wonderful balance of book and song, Henning’s vocals range from powerful to heartbreaking. Her voice is absolutely breathtaking and it really deserves to be showcased on a stage that matches her power. This does not affect her, however, and she fills the room with energy and brightness. Her musical director Benjamin Kiehne doubles as ridiculed jester and brings a seamless ability to the show. His experience and control is a wonderful asset to the story as he accompanies Bobbie-Jean.

In its entirety, All Hail Me, written and directed by Bobbie-Jean herself, is a wonderfully executed performance that entertains and delights. The show was on at The Butterfly Club in Melbourne’s CBD.