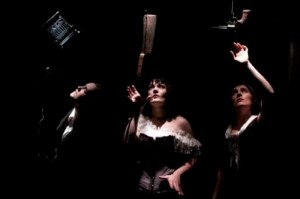 Just waiting outside the Old Adelaide Gaol for the doors to open confirms the idea that this won’t be your ordinary theatre show. Adventuring in the yard, my friend and I find a makeshift grave remembering ‘Missy’; the discovery seems fitting given what little I know about the show. When asked about Present Tense’s Chants des Catacombes, I respond vaguely with “it’s in the Old Gaol, some women sing, and I think you follow them around.”

Perhaps too succinct a summary for the show that follows, but not knowing what’s going to happen is something that really lifts the show – so if you are going to see it then stop reading this, and just know that Chants’ structure alone makes it worth seeing.

The performance begins once the doors to the outer area of the gaol open. Four at a time we are let into the yard and told to follow a path of candles, free sangria in hand. Upon reaching what I imagine was once an exercise yard but is now a grassy courtyard, we find a waistcoated man playing Bitches Aint Shit on a worn out piano – and with that, any semblance of comprehension I have of what is about to happen vanishes.

We are led into the gaol itself and here the women appear. Three women (Anna Boulic, Laura Burzacott and Zoe McDonald) run, scream, and sing around and above us in an orchestrated madness. Over the course of the next hour, they evolve from three maniacal women into three separate entities – but never quite becoming fully fleshed-out characters. Through song and monologue they tell their stories, each given its own setting in a new room.

Moving between rooms and stories is exciting and intriguing, the songs are well chosen and their voices are beautiful – yet it doesn’t quite come together. At the heart of it, the stories are too fragmented to create a narrative. It also seems like more could have done with the space – we move from room to room, but that’s it. Sadly, I can picture the same show being performed on a traditional stage, which defeats the purpose of having such a site-specific performance.

The space isn’t properly engaged with and the stories aren’t properly formed. In any other performance this would be almost unsalvageable, yet the unique setting and execution of Chants des Catacombes – with its live music and guest artists, The Twoks (read Lip’s interview with them here!) – create a beautiful and truly interesting show.

Present Tense’s Chants des Catacombes is showing as part of the Adelaide Fringe Festival until February 29.