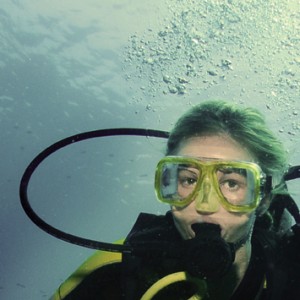 Directed by Nescha Jelk, Sepia tells the story of a Whyalla family, tracking their progression through life and their gradual drift apart against the backdrop of a changing town. Father Neil’s (Rory Walker) concern over the desalination plant proposed for Point Lowly, and its potential effects on the cuttlefish breeding ground, underscore the story.

It is Neil’s paternal fear for the future of not only his son, but the local cuttlefish, which really drives the story. Walker peppers his excellent depiction of the hopeful yet dejected father with a desperate fanaticism, his concern binding the different time periods portrayed together and mirroring the social and familial themes explored. Son Matt (Matthew Gregan) is frustrated but caring, with Gregan unearthing the humour in the script.

As the pin which holds the family together, Holly Myers has a big job in playing mother and wife Emma. Physically she seems too young for the character, especially given the multiple mentions of her age. As the show progresses so does Myers’ warmth and humour, her vocals enriched with a particularly maternal warmth which adds the depth that her physical age lacks.

The performance space – Thinking Place in The Science Exchange – is cramped, the actors standing mere metres away, and the projector which illuminates the backdrop with videoed cuttlefish sitting just behind the audience. This serves as a fitting reminder of our closeness as people, echoing the play’s message of the great impacts created by even small changes.

Steel’s script moves backwards in time, starting in the present and tracing the family’s path back through to their most and ambitious hopeful times, times spent together in Whyalla. The end comes suddenly, with the desalination plant a distant threat and the family’s closeness intact. The final blackout is unexpected, and the story seems a little incomplete. On the other hand, no family’s story is ever truly finished and the battle to save Point Lowly continues to this day. Should some form of artificial conclusion have been constructed solely for the audience’s satisfaction? Perhaps.

Sepia says a lot in its short running time.  It is not a political statement or an environmental indictment, but rather an offering of ideas. It tells us that we should care, that we should take chances, and that we should love while we can. So, definitely not a play about cuttlefish.