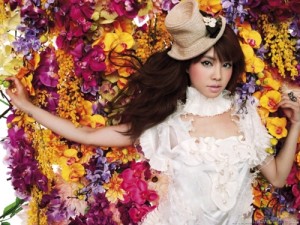 Dramatic, vivid, loud, beautiful… These words spring to mind when admiring the stand- out photography of Mika Ninagawa, with almost every colour in the rainbow making an appearance in many of her photos, along with daring and dramatic lashings of femininity.

Ninagawa, born in 1972 in Tokyo, Japan, specialises in both portrait photography and still life and common motifs found in her work include flowers, fish and landscapes. She has also published her works in four books released over the past nine years, with A Piece of Heaven (2002), Liquid Dreams (2003), Acid Bloom (2004) and Floating Yesterday (2005). Ninagawa has also received critical acclaim for her artwork, with awards including the Grand Prize at the 7th Shashin hitotsubo ten and the Superior Prize at the 13th New Cosmos of Photography by Canon in 1996, the Encouragement Award at the 9th Annual Konica Awards in 1998, the 26th Kimura Ihei Photography Award in 2001 and the Ohara Museum of Art Prize in 2006.

Bright, vibrant and bold colours have always been synonymous with Ninagawa’s photography and have received incredible praise not only in Ninagawa’s native Japan, but with lovers of art and colour alike. Although not as well-known in Australia, Ninagawa’s work has become so big over the past decade and beyond it has been commissioned for advertisements for Coca-Cola, modelling campaigns and even a movie. Sakuran, directed by Ninagawa in 2007, was based on the popular manga series about the rebellious and troubled Tomeki who is sold into the red light district of Yoshiwara and grows up to become a beautiful and much sought-after courtesan christened Kiyoha, experiencing tension between her and rival courtesan Mikumo as well as exploring the harsh reality of being isolated from true emotional relationships in life and love. Ninagawa’s photography has also been featured in such publications as Dazed and Confused Japan, Esquire, Nylon Japan, Switch and Vogue Nippon, among others. Collaborations with BMW MINI and Issey Miyake have also helped Ninagawa gain public prominence.

Ninagawa is promoted by the Tomio Koyama Gallery in Japan and in the past has featured in exhibitions all over the world, including the International Rome Film Festival, Vogue Taiwan, Museum of Fine Arts in Boston, the National Art Gallery in Malaysia, Harbour City in Hong Kong and at Beijing Art Now Gallery in Shanghai. Currently, Ninagawa is displaying her photography at solo exhibitions for shows entitled ‘Flowers and Goldfish’ at MOT/ARTS and ‘noir and SAKURAN’ at TIVAC, both in Taipei, Taiwan. Her art has become the favourite of many art collectors and continue to gain popularity among lovers of art worldwide.

A fresh change from the usual trend of demure and restrained use of subjects and colour in art and photography, Mika Ninagawa’s quirky yet eye-catching hallmarks of colourful and surreal backdrops and beautiful women has broken new ground in art. Her works continue to inspire and influence a new breed of artists and photographers who dream of achieving the same integrity and celebrated incongruity in their own art and will be memorable for many years to come.