David McAllister’s production of The Sleeping Beauty first premiered in 2015. Although it has made slight changes to content since then, it is still a lavish and extravagant production. As the most expensive production in the company’s history, no cent was wasted to create a stunning set design and exorbitant costumes. The aesthetics of the production was its greatest strength, often at the detriment of emotional impact and character development. 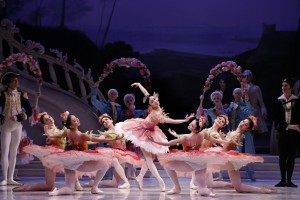 From the first Act, the lavish costumes create an opulent fantasy through a whirlwind of pastel tutus, ruffled dresses, Louis IV gold courtier suits, Marie Antoinette dresses and elaborate wigs. Overall, the costume production cost over $1.2 million, using 300 costumes, 100 wigs and 130 sets of fairy wings. Developed by acclaimed designer Gabriela Tylesova, creation of costumes included digital printing, hand painting and embroidery. The tutus of the fairies were particularly impressive, using pearls, sequins and crystals to develop their characters. The level of detail involved in creating each costume came together to create a stunning fantasy world and magical escapism.

Similarly, the stage design was an overpowering art-piece itself. The show was introduced by a magnificent three-layered backdrop of a castle, bordered by spiralling columns. The lighting was used to add realistic dimensions to the castle, serving as an excellent taster to the fantastical fairyland to come. Once they were rolled up, the grand castle was revealed, providing an impressive and mighty introduction to the show. At the end of the production, in Act III, the three chandeliers that dropped from the ceiling and lit up in the final wedding scene were jaw-dropping. These over-the-top and stunning designs immersed the audience into what felt like another reality.

The spellbinding music directed by Nicolette Fraillon matched the costume design and set to create emotion and narrative development. The movement between the music and choreography was natural, seamless and dramatically contributed to moving beyond a superficial story.

The dancing was also beautiful. The Rose Adage, a notoriously difficult rendition to perform, was executed elegantly by Ako Konko. Konko, who plays Princess Aurora, is compelling and precise in her dance movements. Together, Konko and Chengwu Kuo, who plays Prince Desire, make the perfect dancing duo. While her movements were delicate, occasionally verging into shakiness, he matched her with confident and clean dancing lines. His pirouettes incorporated a perfect mixture of high energy and slow suspense, creating a captivating performance. Their powerful recital was the highlight of Act III. 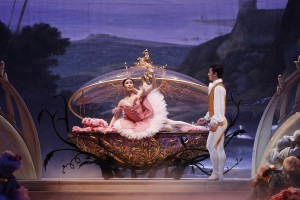 While one of the most aesthetically beautiful performances I have ever seen, I could not help but feel disappointed by the limited narrative, which was overshadowed by the lavish costume and set design. Interestingly, I was stunned to read about the original story of The Sleeping Beauty in the program booklet, based around the rape of an unconscious girl who then marries her rapist. The contrast between the original story and the sweet rendition reinforced the romanticisation of sexual violence, with the rapist of Aurora now turned into her saviour. McAllister chose to align the performance with the Disney version, keeping the production centred around extravagance and ignoring any potential to explore these problematic issues through narrative.

Overall, McAllister’s Sleeping Beauty is a unique, compelling and lavish experience. While lacking in narrative, if you are looking to be transported into an aesthetically absorbing fairy-land, then you will not be disappointed.

The Sleeping Beauty is on at The Arts Centre until June 27th, you can buy tickets here.