Lucky enough to spy tickets to Bjork Digital Dj set for the 2016 Vivid Festival just minutes after their announcement via the Carriageworks Twitter feed, I was tapping away at the ticketing page quicker than you can say ‘no you have bills to pay.’ It’s Bjork; to hell with the financial repercussions.

Thus I flew to Sydney and found myself, eyes and heart wide, mere metres from the pint-sized Sacred Queen of the Arts for half an hour in a tiny, blackened room. My delirious fandom felt as though it was beaming out of my face like the rapture of an Oprah audience gifted scented candles (or killer bees).

In a stunning copper and pearl headdress and baby pink latex top with black bra peeping through, Bjork’s famously wild style was a curious juxtaposition to her seemingly nervous or somewhat shy manner of addressing the small room of journalists. For a woman whose career has spanned 24 years at the top of her game, known for inimitably pushing every artistic boundary, this was both surprising and wonderfully charming. 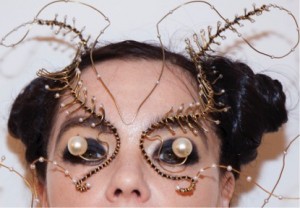 She spoke eloquently of artists needing to keep up with the times, to not shy away from technology, lest they be left behind and miss out on designing our future. From the woman who has driven musical, fashion, technical and now digital innovation for the past 25 years, this is advice well worth heeding. The longevity of Bjork’s experimental career is testament to the truism that audiences and critics alike will continue to desire you, when you refuse to bow to the pressure of trends at the expense of personal vision.

And vision is something she is intimately interested in manipulating in her ‘penetrative’ new virtual reality works. Recently she said her relationship to VR is ‘a natural continuity of music videos. With music, [when] you put your headphones on and listen to an album, you have that really private thing. Virtual reality is similar. It’s that same concentration.’

If you haven’t yet tried it, describing virtual reality is how I imagine it felt trying to explain the internet thirty years ago. You have to experience it firsthand to truly understand the intensity of immersion. In VR, you are being visually and aurally swallowed whole. Bjork conceptually explores this idea with Mouth Mantra, filmed largely from the environment within her own mouth. Watch the video here.

Also available to watch online is Stone Milker, filmed on a black beach in Iceland. While its great that you can view the works on video, don’t mistake this as a worthy replacement for the VR format in which the content is intended to be viewed. Nothing can replace its quiet intimacy or its disconcerting qualities. Click here to check out the video.

On June 3rd and 4th, she DJed for an impressive five hours each night, Her song choices undulated between the strains of traditional sitar to Death Grips and hardcore grime, to soul power ballads and Beyoncé. Everything was delightfully sandwiched together, despite her deprecatingly describing herself as ‘the worst mixer in the world.’

The venue made the incredible misstep of not providing a stage, but rather a simple desk wedged deep into a corner, with a few fake palms strewn about. Because of this, I only managed to see her for a few brief seconds, peeping a strained eye through an unmoving and thoroughly impenetrable wall of men filming the entire set, unmoving, on their phones.

The wall of dudes with phones. Photo credit, Santiago Felipe

She was resplendent in a glowing yellow head adornment, but I gave up trying to actually see her and retreated to the back of the concrete cave that is Carriageworks, with ample room to dance with those who understand it’s poor etiquette to stand and stare at a DJ, even if she is Bjork.

I hope she releases the set online, so I can marvel at her brilliance in the way I do generally – in the comfort of my imagination in my own home- as she blissfully gives some shape to chaotic human feelings, tugging and plucking at the tangled webs of emotion we weave about ourselves, at once delicate and brutal, intense and inviting. Access to this space ultimately, of humanness, is Bjork’s immeasurable gift to the world. Long may she reign into our digital future, our Sacred Queen.