Books for budding feminists: Slut! Growing up female with a bad reputation 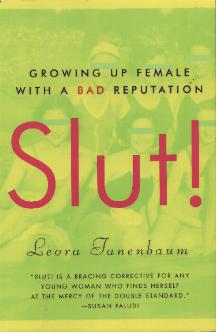 This book by Leora Tanenbaum is all about growing up female with a bad reputation. It is novel about slut bashing, sexual encounters and the horrors of group mentality. Primarily it all comes down to sexual inequality and the problems it is causing. My favourite part about this book is the afterword because it includes a list of comments Tanenbaum received from journalists after finishing the book. Sadly, Tanenbaum was faced with people who had read the book but had totally missed the point: calling someone a slut rarely indicates anything more than the sexism of the name-caller.

Ironically, but understandable, it is girls who are most responsible for slut-bashing. Tanenbaum suggests that this is because they are insecure and competitive. By putting other girls down, a girl makes herself seem superior. By classifying girls into good girl and bad girl groups, there is always the possibility to shame your competition into the bad girl group and rise up superior. But by doing this, girls are only hurting themselves and sending the message that boys are allowed to do it too.

Girls who are called sluts tend to do one of two things. They either start wearing baggy clothing, become shy and retreat from society or they accept that there’s no point trying to prove otherwise and start to engage more, or for the first time, in sexual activity. The shy girls often never feel comfortable about sex and many struggle to maintain personal relationships. The other girls tend to have more problems with drugs, alcohol and unwanted pregnancies. Like the first group, these girls tend to have trouble trusting males as they are often taken advantage of or misjudged by romantic partners because of their slut label.

No one deserves to be called a slut. The male equivalent of a slut is a stud. Rather than shamed, males are celebrated and applauded for exactly the same behaviour as what girls are persecuted for. It makes no sense and it is a double standard that has gone on for too long. The only way to stop slut bashing is to stop thinking of sexually active girls as disgusting, wrong, bad, or cheap. They are none of those things.

So they wear provocative clothing. So they always talk to the boys before the girls. So they have had four boyfriends and they’re only in year ten. It doesn’t matter. None of these things mean they are sexually active and even if they are, it still doesn’t make them a slut.

I learnt a lot in this book, most of it unexpected. There are examples of slut bashing here that are simply unbelievable. Once you read this book you will never call another person a slut ever again and you will struggle to tolerate anyone else who does. Please read it.