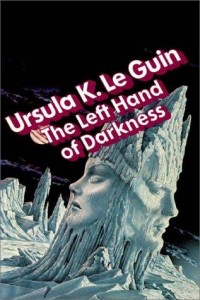 As part of my journey to become a better, more knowledgeable feminist, I decided to explore some feminist fiction alongside the non-fiction. I decided to do this not only because it was getting a little dry constantly reading non-fiction, but also because fiction tends to reflect the society and culture of the writer. By reading fiction by, and for, feminists I hope to gain a better understanding of what feminists want, or currently perceive in this world.

The Left Hand of Darkness by Ursula K Le Guin was one of the recommendations I received from readers after announcing my Feminist Book Journey a couple of months ago, and what a book it turned out to be! It is a fantasy novel about a planet called Winter on which the human beings have no gender. They experience sexual desire in a state called ‘kemmering’ which occurs periodically throughout their life and allows them to reproduce. It is only in kemmering that gender is any way hinted at, as one of any pairing must take on a ‘male’ form and one a ‘female’.  The changes are primarily physical however and do not tend to change how they act or perceive themselves psychologically. After kemmering is over, they return to their non-gendered state.

The story is based around the idea that this planet is alone in a solar system of planets that are populated by human beings as we know ourselves – that is, gendered. Representatives from these planets are trying to arrange an agreement with the beings on planet Winter to join them in a kind of alliance. It is not in war, but so that knowledge can be shared between all humans in the galaxy. The problem is that Winter, being so fundamentally different to all other planets and life forms, cannot understand the possibility of life outside their own experience.

Perhaps what made this book so enjoyable for me was that I have truly never read anything like it. The book dealt with themes based around gender and what happens when the gender divide is broken – it wasn’t fact by any stretch of the imagination but it was definitely thought stimulating.

Stereotypical manly aspects of life on earth are contrasted in the planet of Winter where war is an unknown concept, tears are completely normal and every human being displays both masculine and feminine traits at the same time, with no shame. A representative from the other planets in this mythical galaxy enters Winter and spends time there discovering the planet and trying to build the alliance. He grows so used to the people and their ways that when eventually he sees others of his own, gendered kind, he gets quite a shock. I too began to wish that our gender didn’t play so big a part in our lives after reading this book – it was a truly bizarre read.

Perhaps the only part of this novel that I did not like was that the author decided to refer to the genderless beings as males, using the pronoun ‘he’. Le Guin validated this in the novel by explaining that the genderless beings seemed more masculine overall but despite this I still feel it was a mistake to use the pronoun. So much of the rest of the book used fictitious wording that surely it couldn’t have been so hard to come up with some new pronoun for the species of humans so unlike us here on earth. By constantly reading ‘he’ I found myself perceiving the humans as males and had to frequently remind myself of their parallel femininity.

In terms of what I learnt from this book about feminism and what feminists want, I am not completely certain. I know I gained a greater frustration at the pervasive way that gender divides humans on earth, and also for the way it interferes with social interactions between us. I also questioned why it is that we use our gender so often as an excuse for our suitability or preference towards certain things in life. We do this so often yet it isn’t essential. Like the character Estravan in the novel, who was physically weaker than the gendered human representative but still accomplished the same physical hardships; we can do whatever we set our minds to. I learned to question the society and culture of today and also gained the understanding that gender should not be what we define ourselves by. Sure, I am a girl/female/woman, but first and foremost I am a human being.

The Left Hand of Darkness was a fun, inspiring and easy way to read about feminist issues and to introduce the idea of a world without the constraints of gender. I highly, highly recommend it.

The Left Hand of Darkness is available from Book Depository for less than ten dollars. Get your hands on a copy here.