books you should have read by now: the painted veil 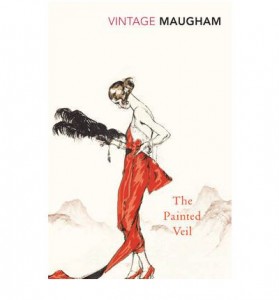 For so many of us, our first interaction with a classic novel is through the movie adaptation: Pride and Prejudice, The Great Gatsby, and for me, The Painted Veil by W Somerset Maugham. This 2006 film starred Naomi Watts and Edward Norton, looked incredible, and featured a stunning soundtrack. Ultimately, the story was about the redeeming power of love.

A few months ago I went over to a girlfriend’s new house, and she brewed tea while I nosed through her book case. Slipping out a spine hiding between penguin classics and texts on documentaries, I called to the kitchen, ‘The Painted Veil! I saw that at the cinema.’

She trotted in with two mugs and threw me a steady stare. This was serious. ‘There’s so much more in the book. You have no idea.’

And it’s true. The Hollywood version completely missed the point.

Quick plot breakdown: Kitty is an airy socialite in 1920s Britain, who in a panic, realises she’s been too picky with suitors and marries the introvert Walter.  She moves with her new doctor husband to Hong Kong where he works, and is welcomed into the decadent expat community.

Kitty is bored by Walter and has an affair with a charming buffoon, but when she is found out her husband coerces her to move with him to a Chinese village afflicted with cholera. What follows is a period of intense personal and spiritual growth as Kitty learns of a world beyond her selfish existence.

Now that you know the basic story, here’s why this marvellous book is now in my top five.

Dealing with rejection and disappointment causes Kitty to grow in character. As she adapts to the poor village and begins volunteering in an orphanage alongside nuns, her eyes are opened to her privilege and what matters in life.

Somehow, Maugham was able to articulate the heartwrenching growth of Kitty’s character believably and without sentimentality. This is our protagonist meditating on the changes in herself:

“I feel like some one who’s lived all his life by a duck-pond and suddenly is shown the sea. It makes me a little breathless, and yet it fills me with elation. I don’t want to die, I want to live. I’m beginning to feel a new courage. I feel like one of those old sailors who set sail for undiscovered seas and I think my soul hankers for the unknown.”

Good God this novel is well written. Every sentence is succinct, yet so much feels, quivers beneath every word. Not an ounce of page space is wasted. A passage for your pleasure, reader:

He sought her face, but she turned it away; he sought her lips; she did not know what he was saying, broken, passionate words of love; and his arms held her so firmly that she felt like a child that had been lost and now at last is safe at home. She moaned faintly. Her eyes were closed and her face was wet with tears. And then he found her lips and the pressure of his upon them shot through her body like the flame of God. It was an ecstasy and he was burnt to a cinder and she glowed as though she were transfigured. In her dreams, in her dreams she had known this rapture.

And despite being quite a serious novel, there is an indelible tongue-in-cheek flavour. When they are discovered, Kitty and her intolerable lover, Charles Townsend, discuss the nature of their relationship. The dialogue progresses with an eyebrow raised:

“In either case my only chance is for Dorothy to stick to me.”

“Was it necessary to tell me that you wanted nothing in the world but me?”

The corners of his mouth drooped peevishly.

“Oh my dear, it’s rather hard to take quite literally the things a man says when he’s in love with you.”

And this is where the film diverges from the novel. The beauty of the movie is Kitty’s decision to love her husband and his essential goodness. They fall in passionate love long after they are married, and this time for realz.

In the novel, Kitty never loves Walter. At best she has sympathy for him, and in many ways he repulses her. When she becomes free of him, she experiences relief and freedom. Which, we can all agree, is not what someone is supposed to feel.

the conclusion is decidedly feminist

In the last few pages, Maugham strikes out against British society in a revolutionary way. Kitty says to her father:

I want a girl because I want to bring her up so that she shan’t make the mistakes I’ve made. When I look back upon the girl I was I hate myself. But I never had a chance. I’m going to bring up my daughter so that she’s free and can stand on her own feet. I’m not going to bring a child into the world, and love her, and bring her up, just so that some man may want to sleep with her so much that he’s willing to provide her with board and lodging for the rest of her life.

Bear in mind that this novel was published in 1925! Wow.

Really, The Painted Veil is the story of a woman’s agency. Kitty exists in a system where a woman has minimal control over her life and must depend on whatever man she has sex with. But Kitty decides to create her own future.

Watch the film if you want—just know it’s an entirely different creation to Maugham’s original. But seriously. YOU MUST READ THE NOVEL.