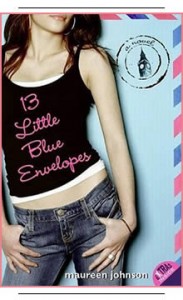 Don’t let the girlish-looking cover fool you. This is quite an insightful and enjoyable book in a demographic currently overloaded with sexism and clichés, which only serves to make it all the more refreshing.

13 Little Blue Envelopes surrounds the adventures of the usually non-adventurous Ginny Blackstone, who is sent on a whirlwind trip around Europe at the behest of her recently-deceased  flighty artist Aunt Peg, who had been unheard of in the three months before her death. Aunt Peg leaves Ginny a set of 13 little blue envelopes with specific instructions she must follow as she treks around Europe in the hope that she passes on the true independence and a free spirit she once possessed.

Although 13 Little Blue Envelopes may come off as sort of Eat Pray Love for the Young Adult audience, it runs deeper, reminding us it can take more than just seeing the world to discover real independence and adventure.

Ginny makes a great antidote to many of today’s supposed literary ‘heroines,’ with Johnson presenting us with a real teenager still trying to find her true identity, and is unafraid to present her flaws. Johnson also litters her story with well-rounded, eccentric and likeable characters that add to Ginny’s crazy adventures. Of course, Aunt Peg is a major influence as the story’s guide and fountain of wisdom.

Johnson has a casual yet straightforward style that can be witty and amusing without being spiteful, with beautiful and detailed descriptions of Europe’s famous tourist locations and landmarks, from the enormity of Harrods in London to warm and salty air of Greece’s beaches. You really feel you have been transported to the very places Johnson takes us to, standing right there with Ginny and sharing her wide-eyed yet curious view.

The plot is fast-paced and broken into snapshots of Ginny’s travels as she goes from place to place. Although some of the usual travel and literary tropes remain, including a holiday romance, an eccentric artist, enthusiastic tourists, language barriers and a straight-laced Englishman, Johnson also manages to provide an original and well-researched story in which she visited almost every country herself and meticulously marked out Ginny’s path on a map before writing. 13 Little Blue Envelopes is a whirlwind holiday of discovery for Ginny, but Johnson still allows us to slowly take the time to absorb her thoughts and feelings.

13 Little Blue Envelopes makes a great change to the long-exhausted young adult literary trends full of  brooding ‘bad boys’  and dull heroines hinging all their hopes on that one true love.  This novel is highly recommended to those who love to travel or wish to, or those who can relate to the awkwardness and search for identity Ginny seeks.