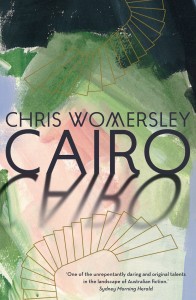 Tom is a seventeen-year-old from a country town who moves into Cairo, a Melbourne apartment block full of eccentric characters. Carrying a heavy suspicion that he is adopted, Tom is desperate to find belonging and is thrilled to be invited to the house of his neighbours, Max and Sally Cheever. The couple are beautiful and charismatic, and are the centre of a gang of artistic and literary friends.

Set in 1986, Chris Womersley makes it clear that the mid-eighties produced Melbourne’s early hipsters; they worked, smoked and drank in the dark corners of Brunswick and Gertrude Streets. Think jazz trumpet. Think standing on a chair in a room of drunken people, reciting poetry. Think lazing on a rooftop, drinking whisky from a tea cup. Led by the sparkling Max of ‘extravagant and reckless charm’, these are the coolest people you, or I, or young Tom, have ever met.

Tom calls Max, Sally, and hanger-on James his Lost Tribe: ‘To me they were fabulous, magical beings, capable of anything.’ These bohemians are a picture of the friends we imagine ourselves having: who are wild and beautiful and creative; who introduce us to an unknown universe; who are effortlessly glamorous and to whom we yearn to belong; who open their circle, briefly, so we can step inside.

Together, they dream of Europe, the ancient homeland of those with a poet’s heart. Max muses about living in the French countryside, and one night when Sally sings, the room transforms ‘into an ill-lit Parisian boîte with sawdust underfoot and the prickle of absinthe in the air.’

Womersley’s prose is lyrical and eloquent. The first paragraph sets the tone of the novel: ‘…to see honeyed light glancing off the floorboards and curlicues of dust pirouetting lazily through the morning air; to smell sweet, stale smoke and the tang of vetiver cologne; to hear the grumble of trams…’

The articulation of each scene brings a literary beauty to the story, dropping the reader into a dirty warehouse where she can smell the wet, unwashed paintbrushes and hear the clamour of arguing junkies in the next room. It is wholly experiential.

As well as illustrious writing, Cairo feels like an homage to Donna Tartt’s The Secret History, a story about ethereal students of Ancient Greek. The protagonist edges his way into the exclusive group, awed by his new friends, but the illusion gradually unravels.

Like The Secret History, Tom’s new tribe comes with a dangerous secret. Our trusting hero becomes wrapped up in an elaborate art heist; he is accessory to that and worse.

Tantalising him with the shared vision, Max deems Tom’s role in the crime an entry into his bohemian ideal: ‘“Afterwards, we’re moving to France…I’ll finish Maldoro; you can write your novel. Live like Hemingway, like Henry Miller…It’ll be amazing. It will change our lives. Our long exile will be over.”’

Now that he belongs to his Lost Tribe, and is promised a literary future, what will Tom do to keep his place?

The idea of a Lost Tribe, of  new, welcoming friends whose seductive glamour eclipses any previous acquaintance, has been visited upon in several classic texts. The beginning of Jack Kerouac’s On the Road sees protagonist Sal a disgruntled divorcee before he is pulled towards adventure by Dean Moriarty, a man ‘tremendously excited with life’. Then there’s the Diver couple of F. Scott Fitzgerald’s Tender is the Night. Teenage actress Rosemary is beguiled by their beauty on the beachfront of the French Riviera: ‘The Divers made her want to stay near them forever.

And just like Dean Moriarty, just like Nicole and Dick Diver, it is eventually revealed that most of the inhabitants of Cairo are amoral. Echoing also The Secret History, the tight friendship group prove they don’t ascribe to any ethics, only the high principles of philosophy and art.

Tom’s bohemian friends convince him that any idea of what is right is ‘innocent’ and ‘old-fashioned’. Sally, rebuking his naïve declaration of love, says, ‘“Tom, you’re only eighteen. I’m nearly ten years older than you. What do you think love is? Fluffy bunnies? Dancing through meadows? Love is tangled, it’s complicated. It’s a dark forest.”’

Any misgivings of stealing a world famous painting from the National Gallery of Victoria, any remorse for adulterous acts, for enabling drug addiction, for deception and betrayal, are washed away by the conviction that the world belongs to them. The beauties of Cairo adhere to no morals because they’re selfish.

And Tom, our youngster from the country town, is eager to throw his ideas of right and wrong out the window, as long as his wild friends keep him around. Because it’s belonging that really matters. In Cairo, Chris Womersley considers what exactly we are willing to sacrifice to remain part of our Lost Tribe.

One thought on “lip lit: cairo”