lip lit: h is for hawk 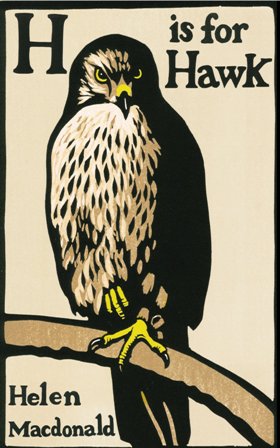 Earlier this year I was working at the Auckland Writer’s Festival where Helen Macdonald was promoting her critically acclaimed memoir H is for Hawk. So far it’s snapped up both the Costa Book of the Year and the Samuel Johnson Prize for Non-Fiction. But as I glimpsed her signing books, at the front of a line stretching across the room and out the front door, I couldn’t help but feel sceptical. All this fuss over a book about birds?

I had the opportunity to listen to her talk, but I declined on the precarious basis that ‘I don’t really care about hawks.’

How I wish, now, that I had gone to see her.

H is for Hawk does indeed centre around a hawk – Mabel, the goshawk Macdonald decides to train after the untimely death of her father – but what these three hundred pages manage to do is something quite beyond your ordinary tale of grief and animals.

The tragic 20th century writer T. H. White, whose identical attempts to train a goshawk are described in his memoir The Goshawk, is a constant source of inspiration and empathy for Macdonald. He appears, a lonely, misguided second protagonist, with his yearning to be a gentleman borne of his closeted homosexuality, and his doomed attempts to train his hawk Gos a result of pure lack of guidance.

White’s narrative is a constant, exquisite reminder of Macdonald’s thematic concerns. This is one of those books where, paradoxically, absence has a great deal of presence, where each sentence has been soaked in loss, in a strange sense that the words themselves are mourning something missing and loved and permanently gone. The reader has no choice but to be swept up by this sadness, in the hope that Macdonald will pull them out the other side.

Macdonald’s father’s absence is inarguably the dominant absence in the narrative. But there are others, too, such as the disappearance of wild animal species at the hands of humanity, to the point where ‘rarity is all they are made of’. Her father’s career as a photographer is also riddled with the desire for absence – the need to be invisible, to watch without the self-consciousness of presence.

This is a trait Macdonald claims to have inherited, and which has aided her thus far as a falconer. One must create the sense that they are invisible, she says, for the goshawk to become comfortable with them.

This snatch of exposition perfectly parallels and draws attention to the “outsider” complex haunting the book’s three main characters – Helen, Mabel, and T. H. White. As the narrative progressed, it became clear what they all had in common: a lack of ease and acceptance within mainstream society.

White, as a gay man during the mid-20th century, felt that his urges were ‘revolting’ and that he could never be his true self in public. Macdonald empathises with the minority identity herself; as a female falconer, she encounters various extremes of sexism throughout training Mabel, such as when a friend’s husband speculates that the reason she and Mabel have connected is because they are both women.

The goshawk itself has, historically, been described as difficult beyond measure. Macdonald decides that they are simply misunderstood. One night, for instance, she discovers Mabel’s playful side and is shocked.

No one had ever told me goshawks played. It was not in the books. I had not imagined it was possible. I wondered if it was because no one had ever played with them. The thought made me terribly sad.

The “outsider” complex not only creates the space for Macdonald to identify with Mabel, and T. H. White with Gos, but also a space in which the readers can recognise themself. All of us, in some way, have felt like outsiders, felt the absence of something or someone. We have all been at some point overcome by the insatiable desire for invisibility.

It is immensely easy, therefore, to engage with and understand why Macdonald chose training a goshawk as her avenue by which to grieve. Taming a bird of prey is not unlike taming grief, after all.

Once I realised this, suddenly the critical support of this book made perfect sense. Suddenly, it was clear why so many people had come to hear Helen Macdonald speak in Auckland, why they’d all lined up to thank her for putting pen to paper. For pulling them out the other side of the sadness.

It was because in H is for Hawk she had managed to turn absence into presence – to articulate the pain and the relief of having to move on from loss, in order not to lose yourself as well. In her words:

There is a time in life when you expect the world to be always full of new things. And then comes a day when you realise that is not how it will be at all. You see that life will become a thing made of holes. Absences. Losses. Things that were there and are no longer. And you realise, too, that you have to grow around and between the gaps, though you can put your hand out to where things were and feel that tense, shining dullness of the space where the memories are.