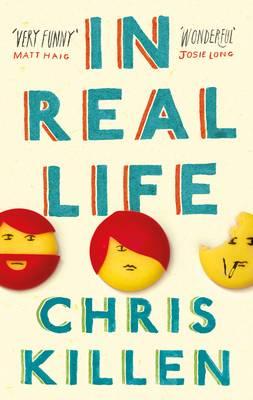 If you’ve ever overanalysed a Facebook friend request, celebrated an increase in Twitter followers or agonised over the time elapsed from when a message was “seen” to a reply sent, then In Real Life is the book for you. Beguiling and affecting, Chris Killen’s latest novel examines human connections both online and IRL.

In 2004 we meet three twenty-somethings afflicted with the usual ennui of the freshly graduated. Lauren has left her boyfriend Paul after writing a con-heavy pro/con list (‘bad breath…pretentious…has never given me an orgasm’). She directs her directionless self to Canada with a one-way ticket. Paul, the anxious writer type, surprises himself by penning a best-selling novel and is marked by the British literary community as “one to watch”. Ian, a mutual friend, dreams of being a musician and pines for Lauren from afar.

Jump forward ten years and the ennui persists. Paul is suffering from second-novel syndrome, faking purpose by teaching creative writing and cheating on his girlfriend with a student; Ian, broke and desperate, hawks his beloved guitar and takes a soul-destroying job in a call centre where his colleagues smell of ‘a sour mixture of coffee and emptiness’; Lauren works in a charity store and attempts to avoid the online world which she likens to a ‘deafening waterfall of misery.’

It isn’t until Lauren discovers her old Hotmail account and rereads youthful emails sent during her time in Canada that she takes pause, wonders at the course her life has taken, and wonders what ever happened to Paul and Ian.

Killen’s first novel, The Bird Room, was a fun, trippy story of identity and technology, which hiccupped along with great lines like ‘I am not a man. I am a hat stand . . . Her favourite hat hangs from my erection’. In Real Life is far more accessible in terms of structure and narrative though it concerns itself with similar issues of online identities and the difficulty in creating real, offline human connections. This is a story lit by the dull bluish white light of an iPhone screen, where lives and relationships are played out in status updates, where we imagine swiping away bad thoughts in our mind’s eye the way we would swipe left or right on Tinder.

Killen’s characters and their struggles with social media are uncomfortably relatable. The thrill of a notification, the guilty excitement of online stalking, the exhaustion brought on by the endless stream of news and gifs, and the ‘email-shaped ache’ are all emotions we suffer through in the digital world. Ian’s dependence on Facebook leads him to place his laptop out of reach – that is until he finds an unencrypted Wi-Fi connection and succumbs to temptation. Paul, perhaps feeling pressure to publicise himself more as a writer online, has to breathe deeply through a panic attack before signing up to Twitter. Lauren remains steadfastly disconnected, in terms of social networks. Her last serious foray into that world being the sweet email correspondence she developed with Ian while she was in Canada. But for her, the internet is now overflowing with a ‘chorus of voices’ and complaints.

While social media pervades the narrative, the theme is not layered on too thick and the amount of cultural references is just right. (In Real Life is, in a way, similar to Taipei by Tao Lin except far less annoying.) The story jumps between 2004 and 2014 with Lauren and Ian’s emails unobtrusively interspersed throughout. As each character’s timeline comes together, the real concern of the book emerges: a concern with “correct” stages in life, adulthood and maturity, finding direction and motivation.

Killen writes in a style that is as minimal as is fashionable, with a wryness that is both hilarious and depressing. The room Ian moves into in his twin-sister’s flat is ‘the kind of room you might decide to end your life in’. There is also a scene involving an entire packet of Babybels, which is utterly devastating. Overall, Killen treats his characters with a great deal of sympathy as they mournfully plod towards their thirties, weighed down by the same anxieties and doubts of a decade earlier.

There’s a quietness to In Real Life that surprised me. I expected the dominance of social media in the marketing of this book to translate to an electric, fast-paced narrative; I expected ‘a chorus of voices’ and a ‘deafening waterfall’ of gifs and “likes” and status updates. Instead social media becomes a distant noise, a cacophony in another room separate to the room the story and characters occupy. Killen has successfully created an intimate, private space in an otherwise public world – and offline story.