lip lit: once upon a time in oz 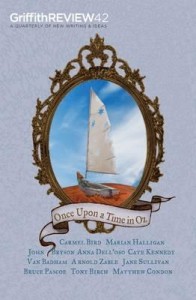 There are stories we grow up hearing; we can never unknow them. Spread through culture by constant retelling, we engage with fairytales like Little Red Riding Hood and Cinderella every day. They inform our conception of reality.

Griffith Review’s annual Fiction Edition, Once Upon a Time in Oz, plays tribute to these eternal narratives with a collection of memoir, essay and short story designed to ‘reimagine the fairy tales that are deeply embedded in our collective unconscious.’

A strong vein running through the collection is a tribute to Aboriginal stories. While it’s clear that Dreamtime is not yet integrated into Australian imagination, several contributors share the ways indigenous storytelling has changed their lives.

Leonie Norrington’s ‘Old Women’s Business’ describes her second mother, a Mayali women she calls ‘Albadjan’. Albadjan used storytelling to teach Norrington as she grew. When Norrington revisits the community as an adult, an auntie tells a story about ‘Gurrdji’. The tale depicts a young woman corrupted by white way of life, contrasting the two cultures.

‘Albadjan’s stories exposed me to a completely different way of seeing the world…rather than understanding themselves as dysfunctional members of the mainstream, as we often do, (Aboriginal and Torres Strait Islander people) come from a different culture and have a different, just as valid worldview. ‘

Continuing the distinction of values in the tender memoir ‘Child’, Meme McDonald illustrates the sacred spirit of place. She explains how she, a white Australian woman, and her family identify with the Aboriginal relationship to nature, under the backdrop of Uluru. ‘Child is not the first, nor will he be the last, to sense the livingness in rock and mountain, in ocean and waterway, in dance of fire and whirl of wind…’

She goes on to explain the essential nature of Dreamtime by quoting Bob Randall, a Yankunytjatjara man. Dreamtime, or Tjukurrpa, is reality; not a thing of the past but something that exists way back when, as well as now and forever.

At the end of her piece, McDonald quotes a Maori man.’“Where are you from?” he asks. “If you come here to know my culture you must first know your own. If you don’t know who you are or where you are from, how can we meet face to face?”’

As well as being instructive and spiritual, stories shape our identity.

Alice Curry writes about the myths that were tied to landmarks in the village she lived in as a child, and the disquiet provoked by the distance when she moved to Australia. ‘The impossible for me was imagining life without the stories that underpinned my sense of self as I grew up in rural England.’

In ‘A touch of silk,’ Victor Marsh considers the process of identifying as a gay man, and the various narratives our culture provides for someone coming out. Early explorations of official texts defined his desire as an ‘abnormal perversion’, and cultural authorities like science and religion determined him an outcast.

Researching cross-dressing in Shamanic culture and other ancient societies, Marsh discovered that the Western narrative is not the only way. ‘Stepping outside of the Abrahamic traditions to learn of other possibilities of meaning,’ he writes, ‘Helps me to destabilise the presumed authority of forms of knowledge.’

Marsh investigated how overarching myths construct our identity, and the freedom of alternatives. Other texts in this collection further explored the ways stories shape our understanding, expectations and behaviour.

In ‘The myths of Azaria, so many,’ John Bryson weaves a tight web examining the way the media’s framing of the death of baby Azaria Chamberlain influenced public conception (and in this case, the outcome).

Ecstatic at the hint of the epic tale of an evil mother, the media disseminated ideas of a ritualistic killing that expanded with every whisper.

The mother was considered by the public as guilty of murder despite protesting voices of authority, and during the second hearing into their baby’s death, the Chamberlains were not given the full legal rights they were entitled to. Lindy Chamberlain was convicted by a jury because ‘the witch myth was to be believed.’

Bryson’s fantastic essay details the way the media forced a story into the shape of a primal myth, and the perversion of justice that followed.

Michelle Law brings attention to one of the primary myths that is played out in our culture: the Happily Ever After. She debunks the blanket relevancy of fairytale romance and the marriage/mortgage/kids script by exploring her family’s relationships.

‘We all lead very different lives, because that makes us happier than pining after a fairytale we’ve been taught to believe everyone should want: a straight, monogamous relationship that leads to marriage and children.’

Mirroring this sentiment, Danielle Wood attacks the exhausting expectation of ‘The good mother’—the model parent seen on billboards and TV ads. The good mother ladles out guilt from her seat of perfection, but does she truly exist?

Other standouts were two modern reimagining of fairy tales. ‘Snow White and The Child Soldier’ by Ali Alizadeh juxtaposes adolescent cruelty with a child soldier’s horror, while Marion Halligan remakes Bluebeard as a mysterious man who works in IT and makes snuff films, highlighting the absurdity of wealth as a sexual asset in ‘A Castle in Toorak.’

There aren’t many bad things to say about this excellent collection of writing—Griffith Review is known, after all, for printing some of the best essays Australia has to offer. However, some of the heavier nonfiction articles tend to overstate the theme, and despite the honouring of Indigenous perspective, there weren’t many Aboriginal voices telling ancient Tjukurrpa stories.

Despite these qualms, Once Upon a Time in Oz flowed beautifully. What’s more, nestled amongst top notch storytelling and analysis are political ideas crucial to Australian society. The writers’ abilities to use traditional fairytales as a prism to examine our culture anew proves the everlasting necessity for stories.