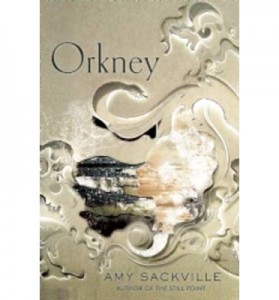 Where shall I take you, I asked, when we are wed? ‘The sea,’ she answered. ‘Will you take me to the sea?’ Oh, I said grandly, oh I will pour out oceans for you.

In fairy tales, as in real estate, it is all about location (repeat ad nauseam). Any change, any alteration, any turning point in a character’s life: let it be signified by a shift in scenery. A walk through an enchanted forest; a furtive exploration of a villain’s castle. Novelist Amy Sackville sets her tales in a far away land—in this case a remote and unassuming island in Orkney, an archipelago in northern Scotland.

A glance through Sackville’s (sadly, very short) back catalogue reveals the author’s fixation on oceanic metaphors and struggling marriages. Her debut novel, The Still Point(2010) revolved around a woman who retreats from the problems in her relationship by delving into the family mythology of an Arctic-explorer antecedent. Sackville cast the woman’s interior life against the wintry, wild Arctic landscape to great effect. In Orkney, Sackville returns once more to her major theme—that vast, sometimes unaccountable disconnect between two lovers­­­—and uses steely-grey, ever-shifting northern sea imagery to interrogate the relationship of her two central characters.

Orkney is told from the perspective of Richard, one of a dying breed of tweed-coated English-lit professors hanging on to his academic career by a thread, writing, as he calls it, ‘a book of enchantment’—an academic study of enchantment narratives in the nineteenth century: ‘Folktales and fairy-tales retold’, an old obsession with ‘Beautiful terrible women… Strange and powerful women.’ His monomania for these literary dames reaches its peak when he falls for one of his students: an elusive, mythically-beautiful girl with smooth white hair and narrow, webbed fingers. Reader, he marries her, and the novel opens as they embark on their honeymoon to the titular ‘tiny ragged island.’

At certain times in the first half of the novel, the unnamed wife drifts dangerously close to Manic Pixie Dream Girl territory. Richard waxes lyrical about the changes wrought on him by falling in love with his wife—he is an old man behaving like a lovesick teenager, drifting around the university common room, hoping to bump into her, throwing parties for his undergraduate class just to get one more chance to see her, talk to her. Instead, what follows is an insightful, unsettling reflection on the interplay of identity and romance: how can we truly know someone if we fall in love with them, when love has such an ability to distort our world-view; to lie to us, so enchantingly, about the true nature of things.

His beautiful wife becomes an uncertainty, her unknowableness becomes a threat—Richard is plagued by his inability to understand her academically, to break her down into smaller, comprehensible pieces. ‘She is Protean, a Thetis, a daughter of the sea, a shape-shifting goddess who must be subdued; I hold her fast and she changes, changes in my grasp,’ he sighs. ‘But I am no prince and cannot overwhelm her; she will consent to marry but goes on shifting no matter how tight I grip. Her hair falling like a torrent of water in which her fingers flick and twist. I dabble in her shallows and long to dive the depth of her.’

Sackville has a mesmerising writing style; part of what makes the twists and turns of the novel so disturbing is the alluring, evocative picture she so articulately paints before tearing it away. As Richard narrates, you in turn wonder whether you are being read to from an old, leather bound compendium of fairy tales, or if Richard is writing you a letter, or if you are snooping somehow through private notebooks and intruding on his most secret thoughts. Sackville spends pages musing on the subject of the colour grey; reading Orkney is a lesson in what a beautiful and under-appreciated colour grey really is: the beach at Orkney is a place ‘[w]here the waves rush in iron-grey and unforgiving, like the cavalry of old wars,’ and at one point Richard and his wife exchange a list of enchanting synonyms: silver, pewter, old bronze, oyster shell, graphite, dove’s wing, goosedown, lead, cigar smoke, ash, sere, slate, and the musical cinereal. This poetic, visual use of language is combined with a tantalisingly slow pace, and the reader is forced to examine every word for hidden meaning and to reflect on every mention of the sea—the wife’s dreams of jellyfish and deluges and drowning all take on different implications at different times.

There are elements of Sackville’s novel that seem shockingly antiquated. The virginal bride, the newlywed couple practically strangers, and the idea of their marriage is presented as Richard’s attempt to tame his wife, despite the fact that her initial appeal lay in her dishevelled, slippery nature. But Sackville uses these elements to symbolically explore complex theories of epistemology. In Orkney, Richard’s marriage is a frame for questions about intimacy and knowledge. He wonders, as anyone might when looking at a loved one, who exactly is this creature lying beside me?