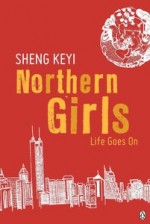 Northern Girls is the first of Sheng Keyi’s novels to be translated into English. Keyi was born in southern China’s Hunan province in 1970, and like Northern Girls‘s protagonist Qian, she left in search of life in a bigger, brighter city. It is Qian’s search for identity — particularly that of being a young women in a sexist society — that drives the plot of Northern Girls. The novel deals with abortion and forced sterilisation, and this nearly cost Keyi her publication.

Keyi was recently in Australia for The Sydney Writer’s Festival, and kindly answered some questions in regards to her writing.

How does it feel when you have to hand your manuscript over to someone else to translate? Is there any feels of trepidation?

Yes. Of course, when you hand a manuscript over to someone you know nothing about it is worrying. But I feel reassured if I know something about the translator beforehand. For instance, I learned that Shelly Bryant, the translator of Northern Girls, is a poet, and my friend said that her translation was succinct and strong in style. I was pleased with this as it is consistent with my writing style and temperament. In the translation process, she even proposed to me that a certain detail was superfluous. I felt that she was right, so I deleted it. I could feel the dedication and efforts of the translator which was important to me.

Your novel was initially unable to be able to be published in China as it addressed the topic about forced abortion and sterilization. How difficult is it for you to weigh up the material and themes you are passionate about to what would actually allow your work to receive the wider readers?

In the 1990s, family planning was still a sensitive topic. Northern Girls was my first novel and I didn’t realize that I had touched upon a taboo. In general, the family planning related policy or issues involved in Northern Girls are merely the tip of the iceberg. I had to wait for more than a year before it could be published. During this period, my second novel Water & Milk, which is about the difficulties young people face living in Shenzhen and their struggle to survive, was published. It is extremely difficult for writers to discipline themselves in the writing process. I can only do my best to achieve freedom of expression through artistic means such as metaphor, magical fantasy and allegory etc, which is an inevitable characteristic of the writing process.

What would be your best piece of advice for a woman who is seeking her own independence and way in the world?

I have no advice to offer to them except that they should treat themselves well, respect and love themselves and create their own opportunities.

The main character in Northern Girls has quite buxom breasts — why did you choose to give her this significant feature?

When I began to write the novel, an image of a plump girl with short hair shot to mind, she speaks quickly and does things neatly, and her buxom breasts show off her youthful vigor.  Men prefer small women, they are easier to fondle. That’s probably the reason why I developed this character. Qian Xiaohong is not a calculating or scheming woman. She pursues sexual freedom and is not restricted by convention however, she has her own morals and values. I also think that the creation of this busty girl was a way of representing womens’ status as the second sex, still under the control of men. Breasts are a physical representation of the female sex. Qian Xiaohong’s breasts bring trouble but at other times are beneficial. She enjoys her body, and she never uses it as a trading chip. In a certain sense, this is a rebellion. This characteristic becomes a burden to Qian Xiaohong though, so heavy that she was struggling to survive this reflects the limitations and restrictions of being a woman in the novel.

Are you working on anything at the moment, or what can we see next from you?

Over the past few years I have been writing a lot of short stories, and my collection Sphinx is soon to be published. In addition, my novel Ode to Morality will be published in Taiwan and the Mainland in August or September; and another novel Death Fugue will be available in Hong Kong.

At the end of this month I am going to Mount. Huangshan where I will work on my seventh novel in seclusion.