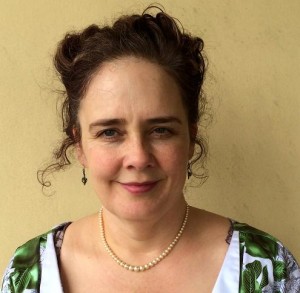 The Bookshelf Diaries takes a peek into the reading life of writers, readers and book lovers. Today, Claire Corbett reveals

I always read several books at once. I’m reading a lot for my PhD, including an extraordinary book by Israeli security academic Eyal Weizman called Hollow Land, on the architecture of military occupation. I’m also reading Matthew Flinders’ journal Terra Australis for my PhD but also it’s a book every Australian should read. It’s incredible, to read his descriptions of parts of Australia never before seen by Europeans and his encounters with very different groups of Indigenous people. He’s really interested in their technology and notes that this group has canoes whereas another group swims out to offshore islands.

I’m also reading What it is Like to Go To War by US Marine and Vietnam Vet Karl Marlantes and just finished Karl Ove Knausgaard’s first instalment of his six-volume Proustian novel-memoir A Death in the Family and Life Drawing, a debut novel by American writer Robin Black – a gorgeous literary page-turner.

Where did you buy them?

I bought Terra Australis and the Knausgaard and Life Drawing from my local bookstore, Megalong Books. I’ve been supporting them for many years and when my novel was published they were very supportive of me.

I bought What it is Like to Go to To War in the UTS Co-op bookstore – it was on special and I’m glad I picked it up. They’re all hard copies – I do buy ebooks but not many. I’d hoped to cut down on the amount of room books take up in my house but it’s not happening.

The Samuel Beckett novel, Watt, recommended by a Beckett scholar I’m studying with. I think Beckett is one of those amazing writers who helps shake your writing out of a rut.

Also Lorrie Moore’s latest short story collection Bark and The Collected Stories of Lydia Davis. And I’m looking forward to getting my teeth into Cracking the Spine, the new book from Spineless Wonders, which is ten short stories by contemporary Australian writers, the stories accompanied by essays and exegesis about the writing of them. Should be a great book to teach from.

But the book I’m really saving up for myself as a treat, a bribe to get this conference paper written, is Edward St Aubyn’s latest, Lost for Words. Aubyn’s the funniest, most elegant writer alive, so that will be pure pleasure.

The Commandant by Miles Franklin Award-winning author Jessica Anderson. It’s about Patrick Logan, commandant of Moreton Bay penal colony and his mysterious fate. Doesn’t sound promising, I know, and I tend to avoid historical fiction but this is one of the best books I’ve ever read, hands down. It has some of the sparkle of Jane Austen on relations between men and women and yet also that feeling of precariousness of the new colony, the moral and political weight of being a commander, the treatment of convicts. And it’s beautifully written. It’s very disturbing that such a brilliant book, one of the best Australian novels ever written, by a multiple Franklin-award winning author, should now be relatively obscure. This does not bode well for our culture.

I’ll say 1984 because it embodies so much that’s important to me – my love of Orwell’s writing and its balance of exquisite prose with brilliant ideas. The way I keep finding more in that book the more I look at it, the way it stays fresh and relevant, its insights into human nature. 1984 is a perfect illustration of why speculative fiction is so critical to the health of our intellectual culture, not just our literary culture.

It also exemplifies the unique ability of a great novel to give us whole new ways of thinking. It doesn’t just describe reality, it creates it. It has partly shaped who I am and what I think; I first read it when I was twelve. I have nothing but contempt for the way the Australian literary scene is so narrowly defined by a certain kind of realism – not that there’s anything wrong with realism but it’s just one style and there’s only certain things it can do.

Poetry. Especially haiku, Philip Larkin and the lighthouse, Emily Dickinson, one of the greatest artists who has ever lived. Just look at her hummingbird poem:

A Route of Evanescence,

With a revolving Wheel –

A Resonance of Emerald

A Rush of Cochineal –

And every Blossom on the Bush

The Mail from Tunis – probably,

Claire has had stories, essays and journalism broadcast on Radio National and published in The Sydney Morning Herald, The Monthly and Griffith Review, among others. Her novel, When We Have Wings, was published by Allen & Unwin in 2011.