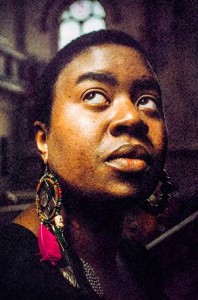 The Bookshelf Diaries takes a peek into the reading life of writers, readers and book lovers. All writers are rabid readers – and slam poet and short story writer Maxine Beneba Clarke is no different as she dips into what’s happening in Australian writing – right now!

I’m manic-crazy-mad for new Australian writing in a way I’ve never been before, and never ever thought I’d be. For the first time, the Oz-fiction shelves, particularly the debuts, seem really fricken exciting and alive.  It’s a buzz too cause I know a lot of these authors. It’s like: these are my friends, my peers, this is my generation! Move aside Australian literature as we knew it, cause the kamikaze kids have arrived, and this quiet ride is about to get rollercoaster!

Where did you buy them?

An Elegant Young Man was bought from Potts Point Bookshop when I visited them recently on a bookshop tour of Sydney. I met Nic Low at the Emerging Writers’ Festival and on-the-spot volunteered to endorse his collection Arms Race as the themes he mentioned really interested me, so that manuscript was last-minute-couriered to my door in A4 loose-leaf by Text. Lost & Found is published by my own publisher Hachette, and was mailed as an uncorrected proof, in preparation for appearing on a panel with the author at a books conference. The Tribe was a review copy sent by The Lifted Brow. I bought The Strays from my gorgeous local indie book store: The Sun Bookshop, in Yarraville.

I’m about to dive in to Half the Sky: How to Change The World (Virago), a book about amazing women who’ve overcome unimaginable hurdles in order to change the world, in preparation for a panel session at Byron Bay Writers Festival in early August. I’m also working on my memoir, The Hate Race, at the moment, so I’m dipping in and out of various other memoirs: Constance Briscoe’s Ugly, Alice Pung’s Unpolished Gem (Black Inc), Anita Heiss’s Am I Black Enough For You? (Random House). I am also desperately waiting for the release of a whole shelf of debuts, particularly Omar Musa’s verse novel Here Come The Dogs (Penguin) and Ellen van Neervan’s fiction collection Heat & Light (UQP).

What’s the best book you’ve read in the past year?
It’s a tie between Luke Carman’s An Elegant Young Man and Melissa Lucashenko’s Mullumbimby.

In parks, cafés, on buses, trams, planes and trains. At the beach. In restaurants.  Seems kind of dirty, cause most peeps like reading in private – snuggled down under the dooner with a block of Cadbury and a silent house kind-of-thing. I don’t know, I find it creepy reading alone. I need real world noise around me.

What’s your favourite book of all time?
That’s a hard one. Probably a short fiction collection called A Piece of Mine, by an African-American writer named J. California Cooper. It’s really short book. I stumbled on it fifteen or so years ago in the university library, just pulled it off the shelf randomly. I was studying writing at the time and it made me realise that everything I was learning about the technic and writing history meant nothing, without surety of voice and style and without thematic bravery and truth.

In terms of inspiration for my own work I read newspapers, social commentary, human rights reports, maps, legislation, court and interview transcripts…but in fact, most of my inspiration comes from watching and reading people.

Maxine Beneba Clarke is an Australian writer and slam poetry champion of Afro-Caribbean descent. She is the author of the poetry collections Gil Scott Heron is on Parole (Picaro Press, 2009) and Nothing Here Needs Fixing (Picaro Press, 2013). Her debut fiction book Foreign Soil (Hachette, 2014) won the 2013 Victorian Premier’s Award for an Unpublished Manuscript.