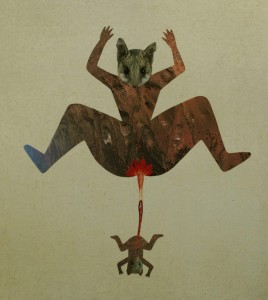 Showing at Canberra Contemporary Art Space, Manuka from 27 November – 7 December, Cleft presented new works by Canberra based artists Louise Upshall and Tara Bromham. The word cleft, as both noun and adjective, denotes a fissure, divide or separation, however despite this it contains is an innate sense of duality, an implied halving to create two parts of a greater whole. Referring interchangeably to the body or the landscape, cleft perfectly encapsulated the work presented by Bromham and Upshall that explores body, landscape and the modern human condition in relation to the natural world. Referring to the notion of ‘visions of a body landscape’, the artists present work that investigates the divide between humans and nature and reality and unreality, ultimately both creating and suggesting alternate, magical ways of existing. In Cleft, both artists have approached the notion of a body landscape in remarkably different ways yet the strength in both bodies of work lies in their ability to exist together, whilst remaining distinct.

Working primarily using natural textiles, Bromham’s practice focuses on the body and reflects her particular gendered experience. Exploring the female experience through wearable garments, Bromham creates work for female bodies which are informed by the artist’s interest in the transformation of women into animals in traditional folktales. Without referencing specific stories, Bromham sees such transformations as expressions of power, a subversion of the typically Western notion that equates women with nature and expects both to be submissive. This exploration of power is a progression from her earlier work where she focused on the transformations themselves. Whilst the artist has always been interested in the female art perspective, falling in love with a woman and becoming intimately connected with both her own, and another’s femininity and female body, has further articulated the feminine focus and encouraged a greater level of self-awareness. This is particularly evident in Freya, named after the Norse Goddess, and Fancy dress of bravado. In both works, the artist is directly referencing the growth of wings, which she considers to be both transformational and powerful- in many folk tales where women transform into birds, it is always as a means of escaping and exercising autonomy, and strength. Created from naturally dyed silk and linen, and feathers collected from the artist’s home town of Wagga Wagga, both works radiate a sense of power, presence and hinted transformation. They also allude to the artist’s emotional connection to landscape-the feathers reference her home town whilst the botanicals dyeing the silk were collected in Canberra. With a focus on traditional textile processes, Bromham employs techniques such as hand stitching and screen printing in all of her work and an overarching and important theme in her practice is the use of natural dyes, created from collected botanicals. For both artists the important part about using natural materials lies in collecting them and the way that process facilitates a deeply felt connection with the natural world. For Bromham, creating wearable garments is a way of sharing this connection with others.

Whilst Bromham’s practice focuses on technical processes and natural dyeing, Upshall’s work is much more figurative. Working predominantly in collage, the artist is interested in the way images can be subverted to change their meaning. Whilst Upshall’s previous works have focused on exploring the female body and the female experience, this recent work has shifted to include explorations of Australian identity coupled with the Australian landscape. In particular, the work presented in Cleft examines the post-colonial relationship to the Australian landscape, an experience that can be fraught with misunderstanding and often conflicting emotions such awe, confusion, connection and fear. Through her collage work, Upshall creates ‘characters’ that present a feminist perspective on gender, and draw parallels between the landscape and the body through imagery that is both figurative and metaphorical. Whilst symbolism is evident in Upshall’s work, the artist maintains that it is not entirely deliberate – she creates her images intuitively, using images that ‘call’ to each other. This is perhaps why Upshall’s work is so effective, it is conceptually strong yet the images don’t look forced. The works the artist presents in Cleft speak smoothly to each other, tying together to form a cohesive whole.

Informed by ancient depictions of women, the poses of Upshall’s female characters honour our ancient human ancestors and reflect on the current human condition, and how the modern world, so removed from nature in comparison to our ancestors, can reposition itself to become more understanding and empathetic towards the natural world. Upshall’s piece Birthing Mama, which references God Giving Birth (1968) by feminist artist Monica Sjoo, is an example of the ancient traditions and sacred beliefs the artist evokes within her work and explores the liminal space between two people that is created during the birthing process. A celebration of female strength, Birthing Mama draws attention to an inescapable yet often censored aspect of the human experience.

The artist’s use of animal heads also pay homage to an age old tradition of blurring the lines between humans and animals, creating figures that become less personified and more archetypal. A recurring and fascinating theme in Upshall’s practice, the final works are beautiful examples of images taking on meaning beyond their initial intention. Upshall’s characters, or ‘guardians’, as the artists sometimes refers to them as, appear to come alive and speak to the viewer in a way that sparks the intellectual brain through a clever use of symbolism, whilst simultaneously provoking a visceral, bodily response.

Upshall’s textile work, whilst implementing similar techniques of natural dyeing used by Bromham, are strikingly different in their treatment of colour, contrast and form. Working with pre-existing garments, Upshall is interested in the direct reference to the natural plant materials through the figurative imprints remaining on the fabric. The textile pieces presented by the artist complement her collage works in both colour and contrast, and present a figurative translation of the concept of the body landscape.