comedy review: adrienne truscott’s asking for it: a one-lady rape about comedy 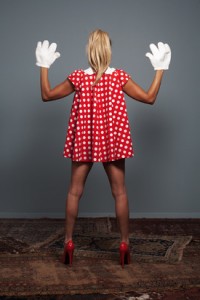 Though new to stand up, Truscott is an established performer and acrobat, which explains the exquisite control of physicality she possesses, along with circus-like slapstick moments that punctuate her comic banter.

The anticipation of Truscott’s well-publicised onstage nudity whispered through the intimate Portland Room as the lights dimmed. As promised, there were no pants. However, as the show progressed it became apparent she was in fact wearing more clothing than I, in the form of five shrinking denim jackets, three wigs and was it eight bras? An example of the dripping irony that laces the one-hour show.

Her considered exploitation of the human desire to look at naked bodies challenges the audience to decide whether to take comfort in the fact that she is very comfortable, or to consider the implications of her nakedness in the context of her subject matter.

Truscott’s cleverness is subtle and warm and, between slapstick and projector gags, she brings up the ignorance of the opposition to abortion in the United States, with particular reference to the Todd Akin “legitimate rape” controversy in 2012. This is one of several references, which makes the audience aware she’s no hack. Underlying her blonde bimbo act is an implied first hand experience of rape and passion for the intelligent discourse about it. Truscott is entirely conscious of what she is doing. She names and shames several male comedians, (in particular Daniel Tosh) who have irresponsibly and unaccountably used rape as comic fodder to explain that the current “rape joke trend” in male stand up comedy is far more offensive than funny.

This show induces the “should I be laughing at this?” kind of laughter where you can feel your face laughing and frowning at the same time, but Truscott convinced me that comedy definitely can be a platform for discussion about rape. Her approach does not shock people with vulgarity but aims to disarm and endear its audience in order to lighten dark places and let people in.

If this is her stand up comedy debut, I highly recommend following Adrienne Truscott’s trajectory because it will certainly go up. She is playing a whopping six shows a week at the Melbourne International Comedy Festival until April 20, so no excuses not to see her!