emerge in the west: review 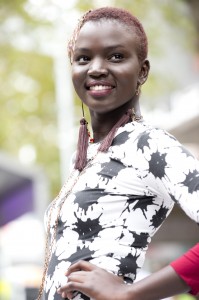 Enter the bedazzling land of the West! On May 16th, Footscray’s Nicholson Street came alive with the rich cultures of Africa at Emerge in the West Festival.  Waves of vibrant traditions washed over me as I strolled through the avenue. A potpourri of emerging top artists hailing from Ethiopia, Sudan, South Africa, Papua New Guinea and more brightened the day with their ample talent. Presented by Multicultural Arts Victoria in partnership with Maribyrnong City Council, Emerge in the West Festival envisions to empower and strengthen bonds between emerging multicultural communities and upcoming artists from refugee backgrounds.

The turf was draped in a myriad of colourful raiment and jewellery. A sea of colourful turbans and eye catching accessories bobbed around streets sprawled in bright hues of red, yellow, black and white. Live African bands filled the arena with soul elevating music emanating from traditional African music gear. The crisp noon air enriched the atmosphere as it blended with the scent of strong coffee and flavourful Ethiopian cuisine.

Tucked into the quainter parts of Footscray, a little part of Africa lives on. The serene streets were lined with cosy African shops. Stores overflowed with colourful splurges of rare African textile, unique Ethiopian pool, exquisite African hair sculpture and Ethiopian restaurants offering a mouth-watering array of local cuisine. Though I’ve just been introduced to this wonderful culture, something about the authentic and original touch it emanated made me feel welcome and right at home.

Beautiful face murals and craft workshops kept children entertained with their intricate designs. Eccentric boutiques displayed raiment and accessories in a fusion of contemporary and traditional wear. The festival even had a set of spell binding circus acts! Teame Ersie awed audiences ranging from children to adults with body contortion acts and physical theatre performing.

A fashion show and Afro Chic Boutique by Vissolela Ndenzako showcased a fusion of Australian contemporary designs with African prints. By welding these two exquisitely different cultures together, the designer opened a new link that broadens cultural relationship based on common grounds.

Playwright, poet and novelist Kabu-Okai Davies offered a forum and book launch for Curfew’s Children – a book that explores cultural conflicts faced by young African migrants to Australia. The forum featured a youth-led debate focussing on the main issues and themes highlighted in the book, further discussing possible strategies to resolve these issues.

With all this hubbub and excitement spreading like wildfire, I couldn’t help but take a gander at the scrumptious food stalls that was driving me ravenous. Saba Foods served Sudanese Tea Ceremonies and Ethiopian coffee. The rich aroma of roasted coffee beans wafted over as the beans were grinded and boiled in special wooden pots. Buna, the hot coffee, was poured into a tray laden with small, handle-less cups. To compliment this lovely, strong flavour, were doughnuts and bread made out of the ancient grain of Ethiopia called Teff flour. The sweet Teff bread crumbled helplessly in my mouth as a tinge of nutty flavour set in. The perfect combination of Teff combined with the searing, bitter coffee had me addicted instantly, pining for more.

In the midst of it all, stood Connecting Cultures, a group of three highly talented women who collaborated with a vision to connect multicultural communities. Ana Varea, Vicki Kinai and Kinga Kaloumaira conduct workshops to impart their skills and empower people with its benefits.

Vicki Kinai from Papua New Guinea, is also known as ‘The Master Bilum Weaver’ in Australia. She is adept in the art of ‘Bilum’ – a form of string bag weaving, passed on from generations of traditional expertise. By integrating Bilum into more wearable art like bags, clothes, accessories and neckpieces, Vicki tells a story that connects her to her land and people. This skill is taught to women to enable them to make anything they want by twisting synthetic wool, cotton or plastic material through a form of knotting. Bilum acts as a therapy session that boosts patience and calms people down, leaving them in a happy state of mind after Bilum workshops.

Ana Varea draws inspiration from natural elements and timeless stories of her ancestors. She uses natural elements like feathers, paua shells, glass pieces found on beaches, twine and tusks to create eccentric jewellery. This gifted artist inculcates the theme of organic and geometric forms in her drawings, lino prints and jewellery designs. By using the power of art as therapy sessions, Ana empowers women.

This impressive trio was not the only showstopper out there. Emerging musicians expressed their exceptional proficiency conjoined with a vision to ‘bring a change’. Traditional African drums, marimba and the guitar were backed by an African dancer representing the dances and colourful attires of different regions in Africa. An array of pleasant and subtle African melodies were created to portray emotional stories about freedom and peace.

The band Jazmaris assimilates a nine-piece Ethio Jazz ensemble by mixing original compositions of legendary Ethiopian composers. Raw Elements use hip hop as a tool to weave stories and campaigns on social issues like racism, abuse towards women, and social inclusion. Skaaki blends an interesting combination of digital reggae dancehall hip hop and soul with African influenced vocals. By raising awareness for the oppressed, neglected and the marginalised, Skaaki stimulates emotional intensity by bringing upbeat and positive vibes.

A variety of innovative dance acts engaged the audience with a view to connect youth from culturally diverse backgrounds. South African house music, hip hop and traditional Ethiopian dance workshops got the crowd moving their feet in a jiffy.

I left the avenue with spirits soaring high, feeling rejuvenated. Emerge in the West Festival managed to touch hearts and bridge connections between cultures. The colossal display of upcoming talents exhibited is bound to open innumerable new pathways in the future.