Impressionism is one of the most popular modern art movements. Those who confess to know little about art are often familiar with the work of French painters Claude Monet and the likes. Impressionism, it seems, is a 19th century art movement that is associated with all things French. And the appeal of French taste and culture perhaps explains the enduring popularity of the movement.

Yet, the story of Impressionism goes beyond that of Monet and co. Australian Impressionists in France, a new exhibition at The Ian Potter Centre: NGV Australia, Melbourne reveals the Australian contribution to the art movement. Featuring a number of never-before-seen works by a dozen artists, many of whom are largely unknown, the exhibition tells the story of an avant-garde movement that profoundly influenced the direction of Australian art.

A Parisian atmosphere greets visitors as they enter the exhibition. Black and white footage of 19th century Paris set to a soundtrack of distinctive French piano music. The wall text sets the scene for the exhibition: it tells of the way in which Australian artists flocked to France, enamoured by the Impressionists and their experiments with bright, pure colours, atmospheric effects and modern subject matter.

John Russell, perhaps the most intriguing artist featured in the exhibition, in is the focus of the first gallery. The artist, who befriended Vincent Van Gogh, Henri de Toulouse-Lautrec and Monet, remains an under-appreciated Australian artist.  His paintings are prominently featured throughout the exhibition and reveal that his s work was on par with that of his French contemporaries. While his talent is unquestionable, the considerable number of his works shown overshadow the achievements of other artists. The augmentation of Australian works with those of the French Impressionists highlights the skill of Russell and his compatriots. Paintings by Monet, Toulouse-Lautrec and Pierre Bonnard, among others, are scattered throughout the exhibition. Rather than presenting the Australian works as derivative, this allows for the Australian works to be considered in the context of their contemporaries. Russell’s Rough sea, Morestil c.1900, is as striking and emotive as the Monet hanging next to it. It is an exceptional work, which demonstrates his mastery of the principles of Impressionism and, more importantly, his ability to translate them into a distinctive aesthetic.

Curator Elena Taylor slowly unfolds the rich story of the Australian connection with French Impressionism through this large exhibition. This connection moved beyond vibrant, bohemian Paris, and into the French provinces. Brittany attracted artists E. Phillips Fox and Tudor St George Tucker, among others. The simple lifestyle of the peasants inspired many paintings, including Fox’s A French Peasant (1889), which is one of the finest works in the exhibition. His sympathetic portrait of the young peasant captures the sense of mystery that this girl would have represented: she lived a life entirely unlike his own, completely removed from the modern world.

Female artists are celebrated in Australian Impressionists in France. The rise in female enrolment in art schools from 1900 onwards meant that more women were joining their male counterparts in travelling to France to expand their tuition. Although Bessie Davidson, Iso Rae and Jane Sutherland do not hold the same status as some of the other artists exhibited, their presence here goes some way to telling a more inclusive history of the Australian artists who travelled to France amidst the lure of Impressionism. Despite their inclusion,the female artists but play a minor role in the show 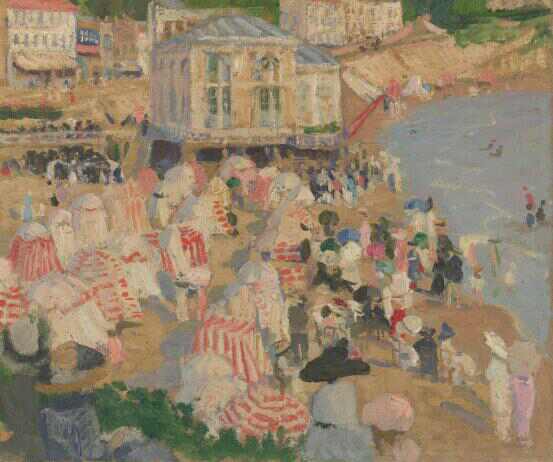 The paintings of Ethel Carrick are highlights of the exhibition. Her sense of colour, narrative and composition result in compelling works that stand out from others on display nearby. Although achieving great success with her paintings, Carrick was largely overshadowed by her husband, E. Phillips Fox, after their marriage. Hers is an all too familiar story of a woman artist whose works were seen as inferior to those of her artist husband. Yet works such as On the Beach (1911) suggest that this reflects more about attitudes to women than her artistic talents.

The current popularity of Impressionism has caused some to dismiss exhibitions focussed on the movement as catering to ‘popular’ taste. While there is truth in this view, it detracts from feats of the Impressionists. It is all too easy to forget just how progressive and experimental the Impressionists were. These were artists who took risks, challenged established views of art and embraced modern life. By travelling to France to engage with the movement first hand and, in many cases, returning to Australian and sharing their knowledge, Australian artists contributed to this enlightened art movement.

Australian Impressionists in France is a surprisingly rich and varied exhibition that contributes to a more nuanced appreciation of Impressionism.

‘Australian Impressionists in France’ is on show at the The Ian Potter Centre: NGV Australia, Federation Square, Melbourne until 6 October 2013. See the NGV website for ticket prices and more information.