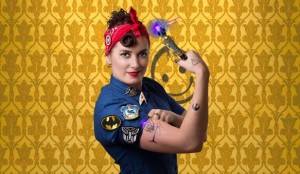 I declared myself a nerd when I was only young, discovering the wonders of sci-fi, the exhilarating breathlessness of awesome adventures, but also the heartbreak of discrimination within nerd culture. So when I heard about a one woman show focusing on the feminist fight of us nerds, of course I was interested. Feminerd: The Cabaret, created by and starring Adele Scott, talks about the persecution of nerdy women and how we can fix it, in a comedic and uplifting way, filled with many a reference to games and television shows.

Hosted at The Butterfly Club in Melbourne, a central point for feminist shows and discussion, it focused on stories of women in nerd society, and how wrong it is that they should feel ashamed of their passions and loves.

When I realised that this show was a thing, I got really excited. It was the first time I had ever seen anything that focused on something I cared most deeply about. I immediately jumped on the chance to go see it, taking one of my nerdiest friends with me, and prepared for what I hoped to be a spectacular performance. I must say, I was pleased. Not only was I impressed at how many references from a variety of areas there were, but also at the skills of one Adele Scott.

Scott was humorous, enlightening, considerate and generally had a very open view of the topic. She described being a nerd as being passionate about something, no matter what it was. While most people think nerds are into Star Wars, Star Trek and other sci-fi, such as Doctor Who, it is so much more than that, and Scott proved that to her adoring audience.

While the show could be considered a stand-up comedy, it was laced with original songs about hot topics, or issues, that Scott was fighting for. Some were comedic, and some filled the audience with tears. One such song was her dedication to her husband, which moved even her to tears, even after several nights of performing it.

Scott was quick to adapt to the audience, interacting with them where she could, and allowed for improvement upon her act each night. Even as an addition to her wonderful performance, all were invited out to the bar to chat with her about anything we wanted. This was a good addition on her part, as she was able to interact with those who she had performed to, and hear their thoughts, opinions and what they are really passionate about.

Packed in a small theatre, the show felt cosy and intimate, like Scott was speaking directly to us as individuals. In saying that, at times there were awkward pauses while waiting for music to begin, and overall it felt a little short. But maybe that was because it was so good I wanted to keep watching!

If the show is ever brought back, on whatever platform, it is worth a watch, especially if you have an interest in feminist heroes such as Buffy the Vampire Slayer, or Daenerys Targaryan. I think Adele Scott would be pleased to hear she is turning into a feminist hero just like them.