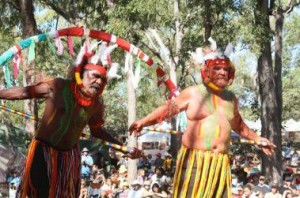 ‘It is the spirit making you and me draw breath and making the plants grow and moving the wind. It gave rise to the stars and the stardust and the planets and eventually us.’

David Salomon is talking about tjukurpa. Misguidedly named ‘Dreamtime’ by white folk, the Pitjantjatjara word can mean a simple story; but it also encompasses the divine, as well as Aboriginal society and worldview.

‘It’s the story of how you live with people,’ says David, ‘And it sets out obligations to your kinfolk. It’s connected to different places in country and is a narrative that is part of the creation story of a particular place.’

Through John and Murray’s stories, viewers are invited to experience tjukurpa. In the APY lands, Murray grew up in the old way without interruption from colonial squatters or the government, while John’s family comes from North Queensland. A huge amount of his people were massacred in the Palmer River Goldrush, and his family ended up in Cairns. John didn’t have the opportunity to live in connection with his country until later in his life.

In Two Brothers Walking, David follows the two men as they journey through remote country, capturing experiences which illustrate the Aboriginal relationship between spirit and land. He talks about a time that stuck out to him:

‘We were with senior men who have custodianship for a particular track of land that leads into a waterhole, and there’s a story there. So when you enter that site, you will go to a pile of rocks that is representative of women’s digging tools. In fact, that is a sacred women’s site.

‘The oldest fellow,  Ginger (a famous painter), stands up and just starts telling the story about Wanampi, the Rainbow Serpent, and it has to do with principles of regeneration. So that’s the sort of poetic and mythic landscape that we enter into as those stories are being told and those songs are sung.’

David’s eyes glitter. ‘Often those songs are sung around the warm, flickering firelight of an evening and everyone’s fed and celebrating their culture, and it’s entrancing. And you see the light flashing off the painted bodies and it’s a real spectacle. A spell is cast over people watching.’

The film captures many instances of cultural celebration, most notably at the Laura Dance Festival. It is here that we witness one of the most powerful elements of Two Brothers Walking: the link between personal experience and political advocacy. Like a lot of left-leaning Gen Y, most of my interaction with Aboriginal culture has been limited to being aware of the intervention injustice, the fight for constitutional rights, and government reforms like Closing The Gap. This was a helpful entry into understanding tradition.

‘We have this idea that they are unaware of their own circumstance. It’s very patronising. Nothing could be farther from the truth, because they have a system of governance that is based on consensus. Their decisions are carried over until everyone agrees.’

Instead, the pathway to the future is about honouring ancient Aboriginal tradition. And what better way to forge that than to share it?

‘The primary goal for Two Brothers Walking is just to show culture. It’s the strongest response to the policy, and the institutional racism, and the lack of treaty.’

David acknowledges that he is a whitefella standing on the bridge between cultures. Through this lens, an alien culture is made accessible to those with no experience of Aboriginal culture.

‘Two Brothers Walking is trying to be a point of first contact for a lot of people. When I first went out bush about fifteen years ago, it was a shock because no-one spoke English. I came away realising that Australia was not the place I thought it was.

‘I was thinking, How could anyone know about it unless you were one of the fortunate  connected with people in community? Where was there a chance?

‘We really don’t have to argue that tjukurpa is still alive. We’re saying, “Here it is. Come and see it.” It’s existence is axiomatic. You don’t need anything else.’

‘Murray says if you’re born in this country, you belong there. It’s part of you. And it’s for everyone.’

For your chance to win a double pass to the Adelaide March 6 screening of Two Brothers Walking (including drinks and a tour of Adelaide Studios), email [email protected] with the subject heading ‘Free movie pass’.