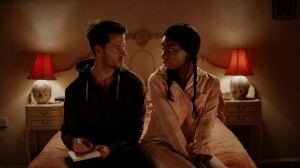 Last weekend I binged on Netflix series Chewing Gum. It’s great, watch it now if you like; there are only 12 episodes across two seasons so it won’t take you long! The show’s central character, Tracey, is played by its talented creator, writer and theme song-singer— Michaela Coel. Tracey lives on a housing estate in London with her conservative mother and sister. There is something strangely utopian about her close-knit life on the estate: the colours are bright and the people are exaggerated but somehow, they are also authentic pictures of working class Brits. All this goodness is not what this article is about though. This article is about awkward sex on TV, because this show does it so well.

Chewing Gum has my favourite ever sex scene ever. I watched it and let out a weirdly loud single HA. Tracey is a virgin and has decided that she needs to sleep with someone, sounds like a familiar trope I know and hey that’s not what is funky fresh about this show. It’s the way they present this “virginity” that makes this all interesting.

There are scenes where Tracey talks really quickly and confidently to the camera and she mentions her hymen often in this rabble of information, she lists off all of this stuff that is going on and then somewhere in all of this she goes ‘aaaand still got my hymen’; it’s like Tracey’s hymen is its own character we need to occasionally check in on. But overall her virginity isn’t even the point, it’s more about revealing how complex people can be, innocent, sexy, controlled, uncontrolled and then it takes this info and further scrutinises how we construct the concept of virginity; but believe me in a fun way not a trite way at all.

Anyway, in my favourite sex scene Tracey is trying to have sex with a guy she has just met. They are in the bedroom and things are going quite well then, she basically just sucks on his nose and eyebrows then jumps on his face whilst still wearing her pyjama bottom. HA.

Chewing Gum falls into the slightly more familiar in season two with Tracey being dropped into quirky sexy-ish situations like sex parties and a black fetishist house which is still handled with originality and heart because the characters are very well formed; but no, nothing amazingly new there after the eyebrow licking.  Still, this show got me thinking about sex on TV and how it’s increasingly portrayed as… well, awkward.

Is it weird that we learn a lot about sex from television? As a kid, anything remotely sexy on TV would embarrass me— prudish young me would think it was all quite inappropriate. Perhaps this reaction has some psychological basis or perhaps it was a sign of the times? In the 90s and 00s sitcoms had sex but (at least in the PG eps that I watched) it wasn’t funny sex. Funny things could be happening around sex in a show like Friends, in fact the lead-up to sex was often the joke (think Chandler stranded in a public toilet after a childhood friend he thinks is after a fling takes his clothing). But the sex itself wasn’t the point of the joke.

Fast forward to popular sit-coms like How I Met your Mother, Two and a Half Men or The Big Bang Theory, these all had awkward sex in them, but it’s the kind of awkward which is like, haha nibble claps, haha butts, haha wanking rather than seeing real awkward sexy stuff. Sex is nothing new on TV and the shock factor of seeing sex has mostly gone, so what counts as awkward has been pushed and pushed by newer sit-coms.

As a quick note I cannot help but wonder if Sex and the City as a satirical look at sex and relationships foreshadowed the boundary pushing sex scenes we see on current television shows. Was Samantha the original Hannah (Girls), Tracey (Chewing Gum) or Ilana (Broad City)? Regardless, this early 00s and 90s TV sex is different to what I would argue is happening now in the millennial sit-com. Now we see sex that is awkward because it’s kinda real, or real enough to make us realise that having sex is kinda hilarious.

So then let’s fast forward again to Girls breaking onto the scene with ample full-frontal nudity and sexy time chatter. I never really understood why they talk so much in millennial sit-com sex scenes, but I have three possible conclusions: 1) it is because the episodes are short and they have to put that content somewhere, 2) other millennials do this and I am not cool, 3) it’s to ramp up the awkward factor e.g. a sort of exposé which reveals that nobody is quite sure what they are meant to do, as revealed by our lovers’ awkward explanations during their sex times.

Awkward sex is even better in Broad City because it is all about pure pleasure, honesty but also joy, e.g. see the episode where Ilana has sex with a “tall” basketballer and keeps his shoe. What Girls started, I’d say Please Like Me perfected as they create scenes which are awkward but also romantic and not just hetero. It’s hard to make something awkward and romantic but (and this may be just me), the awkwardness is what makes sex romantic sometimes… it’s like hey I like you, because I trust you and stuff can I put my bits here and see how that goes…?

It’s through watching shows like this that I have found ways to talk about sex more openly as it is shown from a perspective I can relate to. I hope this is the point of the awkward sex scene: to encourage us to laugh and see sex as at once weird and wonderful, rather than just a salacious ploy or wacked in there for shock value. I could never have written an article like this a few years ago. I want the world to see sex as not something mysterious, private or scary and that means talking about this stuff and lapping up the awkward truth!