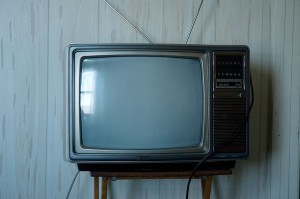 2017 has seen the continued rise and rise of TV as an art form. Lip’s film writers have chosen their favourite shows to share with you – there’s still time to binge watch all three before the year officially comes to a close!

In a year of female heroes, no fictional heroine has shone so brightly as Offred (Elisabeth Moss) in the television triumph that is The Handmaid’s Tale. This TV series tightly echoes the current political climate whilst also being just damn good viewing. For those not already drawn into the event that is The Handmaid’s Tale, the story is set in a near future world, where fertile women  have become  ‘handmaids’, property of the state and tasked with the duty of repopulating a strange baby-less USA. This world is full of ritual and strict control over women’s bodies, but there is a growing sense of rebellion that starts with silence and whispers and may slowly become action.

The Handmaid’s Tale is a perfect example of how to do a book adaptation right. Developed through close consultation with the novel’s author Margaret Atwood, the series offers viewers familiar with the story clever elaboration on some of the book’s characters and themes. These developments add depth whilst still keeping the mystery going. Visually stunning and impeccably cast this series is the perfect fictional TV series for the 2017 feminist. In Australia it is also a triumph for free first-class television, as the entire series is available to stream for free on SBS on demand – watch it now and join the revolution.

What happens when a friend from college goes missing and a bunch of self-absorbed twenty-somethings happen upon her disappearance? Two seasons of hilarious mystery-solving, that’s what. Led by the seriously stubborn Dory (played brilliantly by Alia Shawkat) is the seriously underrated Search Party.

The storyline alone is so powerful it ropes you in and steals hours from you at a time, while a talented cast carry us on a ridiculous and shocking ride to uncovering the truth. The road to discovering what happened to Chantal Witherbottom is paved with paranoia, heartbreak and betrayal, and we wind up knowing more than we bargained for. The series is chock-full of millennial humour, but don’t be deterred, for the writing is witty and self-aware, and it –thankfully – avoids every cliché you expect it to encounter. One thing is certain: Search Party will leave you hungry to know more and to delve deeper into the mystery, laughing and cringing at its every twist and turn.

Mindy Kaling’s ensemble comedy had its ups and downs over the years, but its final season rewarded those who have stuck with this quirky series. Highlights included a cameo by Reese Witherspoon as a mirage of herself, and a uniquely Mindy take on the classic ‘running through New York to tell someone you love them’ sequence. The show never shied away from its celebration of romantic comedies, but it always made those tropes its own. This season managed to pull off a thoroughly satisfying romantic conclusion while ensuring this came on its heroine’s terms. Mindy Kaling’s subversive sense of comedy is welcome in today’s political climate (her character’s politics have always been unexpected and ironic), so here’s hoping we see a lot more of her work in future.