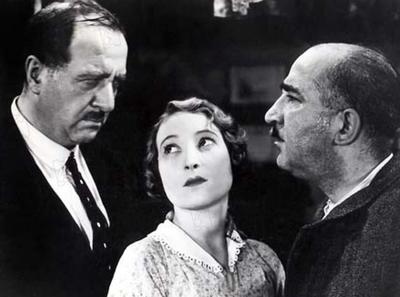 Winter brings with it many opportunities for sequestering oneself in basements, drinking red wine and absorbing vast quantities of French cinema. Chance such as this also presents itself in tandem with the prospect of justifying introverted and potentially anti-social behavior. Indeed, who needs friends with the likes of Louis Malle, François Truffaut and Juliette Binoche as company? ‘Studies’ have been conducted, ladies and gentlemen, and it appears that in a large number of cases, French cinema trumps social interaction. The only cause we shall ever have for concern would be if everyone started to do this, and if society as we know it fell spectacularly to pieces. Fear not, there are many among us who seem to fear subtitles. It is thus unlikely that this will ever come to pass.

With a title apt to make any child or child-at-heart snigger, Marcel Pagnol’s The Fanny Trilogy, is an excellent viewing choice for those inclined to spend their winter months lurking in fungus-ridden seclusion. Set in the thirties in the southern French port, Marseilles, it traces the tragic and irrational love story between Marius (Pierre Fresnay), Fanny (Orane Demazis) and humankind’s ultimate foe: the sea. Having entertained a filial relationship for almost their entire lives, naturally by the end of the first installment, Marius (1931), the two realise that they do in fact love one another and plan to marry, much to the delight of Marius’ father, César (Raimu). Alas, Marius is a confused young man indeed. Simultaneously infatuated with the sea and with Fanny, he cannot expect to entertain such an odd love triangle for much longer. He finally chooses the inanimate, the dangerous and the unloving; he chooses the sea.

Fanny is initially more than a little crushed, but things only get worse for our scorned heroine. Early in the second film, Fanny (1932), she discovers that she’s pregnant. It being the 1930s, when society was less rational about these things than it is now, it seems certain that she is doomed to a life of interminable shame and exclusion. Enter Honoré Panisse (Fernand Charpin), prominent and well-seasoned local businessman who just so happens to entertain a very large and irrational liking for our eponymous heroine. Knowing full well the child is definitely not his own, he marries her and, depending on how you look at it, saves her. In the final film, César (1936), everything falls apart. Truths are acknowledged, professions made and certain characters conveniently die. Voilà! Everything is illuminated and in its proper place.

Or not. What really let this trilogy down after the first installment is the utter passiveness of what could potentially be an intelligent, headstrong and norm-defying heroine. Pushed here and there by the wishes of any and everybody but herself, the Fanny we know after Marius’ departure is little more than a carcass being torn to shreds by scavengers. What’s more, she learns nothing from her experiences. In the closing moments of César, as she walks off into the twilight with her next idiotic decision, she’s right back where she started. Any audience member that happened to be the proud owner of a brain before Fanny’s commencement would for certain have removed it throughout the course of the film and thrown it at the television.

Strong female characters, especially in older films, are infectious. They add an entirely different dimension to a celluloid world we can never be part of. Usually their behavior, seemingly rational to the ‘modern individual’, is a really simple way for us to inject ourselves into their narrow world. When they break things – hearts, social custom, plates – it’s almost as if we were doing it too. Their ups, downs, leaps and spontaneous twirls are all ours.  In the case of poor, cerebrally challenged Fanny, frustration is instead directed at her. The poor dear doesn’t twirl; she runs into things headfirst. She is little more than sexism personified.

This is not to suggest that none of these films should have ever been made. Marius, certainly, is still quite spectacular in many respects. It should just have never been continued into a trilogy. That way the viewer could have been left to its own devices on Fan Fiction or rogue sheets of scrap paper to figure out how Fanny and Marius would eventually reunite. Everyone would go home, or upstairs, happy.