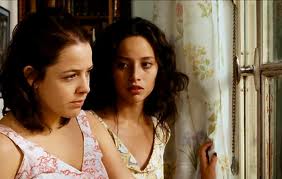 Back To Stay (Abrir puertas y ventanas) is the debut film from Milagros Mumenthaler. The winner of numerous international awards (including best film at the 2011 Locarno Film Festival); it is ultimately a low-key family drama. It’s also a semi-autobiographical tale from this first-time director.

The movie is actually a concentrated character study that is based on the domestic lives of three sisters Marina (María Canale), Sofia (Martina Juncadella) and Violetta (Ailín Salas). The trio have recently lost their grandmother who had doubled as their guardian. The trio range in age from eighteen to their early twenties, but they are rather aimless and require adult intervention as they flounder in the aftermath of her death.

The three are still growing up and finding their individual places in the world. The eldest, Marina acts with maturity and takes on some of the extra burden and added responsibility. Her two sisters however are just lazy, directionless and self-absorbed.

The film itself is beautifully shot and the three female leads are attractive young women but it all feels like there is too much style and no substance. The protagonists are also dysfunctional and not particularly engaging or likeable.

The pacing itself is tediously slow. There is little dialogue save for the occasionally bout of bickering, sibling bonding and platitudes. It’s also quite sparse in providing any detailed background information about the family, meaning it can lack real depth in the present. It also means that a lot of this story feels contrived and artificial at times.

In short, Back To Stay is a forgettable drama. While it attempts to be intense and nuanced, it fails to show little more than a family of pretty young things in their house and garden. This coming-of-age tale feels like there’s a whole lot that’s missing or left out as the true emotions of loss, growth and identity are not properly actualised or explored.

One thought on “dvd review: back to stay (abrir puertias y ventanas)”