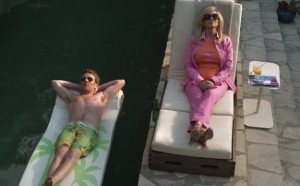 Boy Toy is a light and airy comedy. It’s one for the fans of Deuce Bigalow: Male Gigolo and those no brainer, teen comedy flicks. It is one upbeat and casual romp that errs on the formulaic and predictable.

Jake – played by John White (American Pie presents Beta House/The Naked Mile) is an unsuccessful underwear model living in L.A. Despite the career failures, he makes up for all this with his good luck with the ladies, as he consistently acquires notches on his bedpost with ease. The only problem is that it’s not his bed but his friend, Ronnie’s (Dov Tiefenbach). But Jake is the alpha male in this relationship and he pushes his nerdy friend to sleep on the couch even though it’s the latter’s house.

After yet another unsuccessful audition, Jake’s friends Ronnie and Mouse (Vivian Bang) decide to get enterprising. The result is that Jake will become a platonic male escort for lonely, single women. Jake soon finds himself on easy street after landing a lucrative job with the cashed up Barbara (Morgan Fairchild, better known as Chandler Bing’s mother on Friends). But naturally this success comes at a price and things go awry when he meets sweet yoga instructor, Norah (Mircea Monroe from The Change-Up) and the pair start dating for real.

Boy Toy is uneven in parts but the cast have an easy chemistry and the story is uncomplicated. The comedic moments often come from the awkward situations that the lead characters find themselves in. And while the jokes are not absolutely hilarious, there are a few chuckle-inducing elements in there. Ultimately, Boy Toy is not the greatest flick of its kind but it is positive and cheery enough, a saccharine substitute even though you may be looking for real sugar.