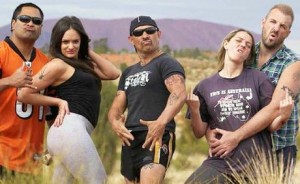 Housos vs. Authority isn’t a film that takes itself too seriously. Instead, this is a high-octane, provocative comedy that has sacred cows on its radar. It’s also about as subtle as a slap in the face with a cold, dead fish. So, welcome to Sunnyvale- a town where being dumb, drunk and racist is worn like a badge of honour.

The film itself is a spin-off of the SBS series, Housos. It is written, directed and stars Paul Fenech, the creator of Pizza and Swift & Shift Couriers. The story and overall delivery of the film itself shares a lot in common with the outrageous pantomime of Fenech’s other cult creations.

Sunnyvale is the worst suburb in Australia. It’s also home to a fictional housing estate called The Block. This place is called home by dole bludgers, thieving junkies, single mums, errant hustlers, scary bikies and other miscreants. A lot of the characters are dim-witted, foolish and lazy, except when it comes to out-witting “the establishment” or any other body of authority.

Shazza (Elle Dawe) is a foul-mouthed stoner and single mum who discovers her own mother –who had previously been missing in action for decades – is terminally ill. So she ditches the kids and decides to travel to Uluru for one last visit. Along for the ride is Shazza’s slacker de-facto Dazza (Jason “Jabba” Davis) and his clueless mates (Kevin Taumata and Vanessa Davis). This tight-knit group manages to achieve the impossible – at least for some self-proclaimed bludgers – and reach the Red Centre by driving a camper van donated by the local bikie gang (in exchange for the delivery of drugs).

This strange, hedonistic group are also led by Franky (Fenech), a thong-throwing sex addict, wayward father and a drunk. Along the way they will each have run-ins with the police, government and the media in what proves to be stupid – yet colourful – fun. The list of cameos is long and includes: Garry Who, Angry Anderson, Russell Gilbert, Elliot Goblet and Chopper Read.

This film is not for everyone. The amount of swearing will offend some people while the prudish and easily offended will hate the sex scenes, violence and cheap laughs at the disadvantaged sections of the community. But the Housos film’s biggest pitfall is that the plot is weak and the crassness does get tiresome and repetitive after a while.

The acting suits the film’s purpose. The characters often border on being like cartoon stars and the actors occasionally perform like absolute mugs. The ones that don’t fit this mould are just shrill as they go about executing their own stupid acts. But Housos vs. Authority is redeemed by the sheer volume of jokes. Occasionally these do hit the mark and the high-energy pacing means that there is always some form of hijinks or misadventure unfolding.

Housos vs. Authority feels like an extended episode of the loud, brash television show. In fact it’s almost like Fenech’s taken the farce and stereotyping out on the road for a crazy spin. It is outrageous mayhem that achieves what it set out to do- provoke and annoy while proving an enjoyable enough experience for the more devoted fans. Ultimately, Housos vs. Authority never sits still or rides into territory considered middle-of-the-road, instead it is a satirical, idiot freak show and celebration of the Aussie Bogan.