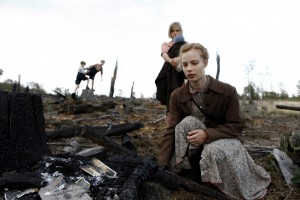 Lore is not your typical film about World War II. The story is based on a novel by Rachel Seiffert and is about a young family of middle class German children who are forced to flee their home as the allies overtake Germany at the end of the war. It is an eye-opening journey for these children, who have previously been sheltered and cocooned from the atrocities happening in the world, and they are forced to grow up and face these wretched circumstances head-on.

This is the second feature from Australian director Cate Shortland (Somersault). It is as artistically shot as a film by Jane Campion. There is little dialogue and this is exclusively in German. The shots are beautifully composed and focused (with Shortland mainly using close-ups to draw the viewer in) but the experience does suffer from feeling fragmented as the story lacks a clear arc.

This is a character-driven narrative where the lead heroine, Hannelore, or Lore (the excellent newcomer, Saskia Rosendahl) is shown to be a complex, young woman. She is 15 and has previously grown up under the tutelage of her SS Officer father and her mother (a staunch Nazi and anti-Semite). Lore is a product of her time and circumstance and sympathises with these anti-Semitic values.

But her views are challenged when she is forced to lead her younger sister (Nele Trebs), twin brothers (André Frid and Mika Seidel) and their baby brother Peter on a journey to Hamburg. They must travel to the safety of their grandmother’s house in the woods because their parents have been arrested. Along the way she meets the sympathetic Thomas (Kai-Peter Malina). The young man is a refugee traveling with Jewish papers and he helps Lore and the family with food and basic survival techniques.

Through this encounter, Lore is forced to re-evaluate her morals and values. She is also attracted to this guy and is undergoing her own sexual awakening as she matures from being a teen to a woman. There is lots of attention given to her character development but sadly there is no major epiphany at the end. This makes the often unfocused melodrama feel like it provides lots in the way of style but ignores the more important issue of substance.

Lore is at best a bold, lush and haunting drama that handles a turbulent time in history and juxtaposes this with the affects on a young woman who has to grow up through this difficult period. It is just unfortunate that despite some memorable performances from the young actors, the film is unlikely to stay with you beyond the closing credits. Often drowned by its own self-indulgence and slow-burning, repetitious story-telling, it ultimately feels like Lore is a grand tale of missed opportunity.