dvd review: the skin i live in 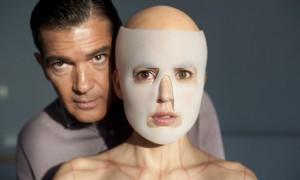 The Skin I Live In is a provocative film. While some people will find elements of it titillating, others will no doubt find it extreme and even grotesque. It is a difficult film, a suspense-filled drama that is initially shrouded in many layers of ambiguity. The dramatic build-up does reach a serious climax, as all these issues are resolved in an eye-popping way during the final act.

Director Pedro Almodóvar has described the tale as a “Horror story without screams or frights”. The reason it is unlike a conventional scary, blood and gore type flick is because this one is instead about a star surgeon played by Antonio Banderas. He seems – at least initially – to be rather innocently designing a new form of synthetic skin in a labour-of-love-type way for his wife who has been badly burned in a car crash. But what ensues is an almost Frankenstein-meets-The Silence Of The Lambs-style story. It goes without saying that this is not one for the faint-hearted.

The Skin I Live In is set in Toledo, Spain and gradually the story unfolds to reveal minor aspects of its true core before ultimately getting under your skin. The film is beautifully shot and is peppered with fantastic artworks as well as zeroing in on lead actress, Elena Anaya’s body. It is a perfect female form but it does mean that the proceedings often feel a lot like a skin flick. The overarching idea however, is one of an art-house movie that is also rather surreal even though the edges seem rather ragged, proof positive that even things that are truly beautiful can also be ugly.

Almodóvar’s offering is a dark and twisted tale that grapples with issues like gender, identity, love and ethics. It boasts lots of twists and turns. While these aforementioned themes have been tackled before rather frequently, it is with a rare kind of panache that it is executed here. The road less travelled proves a weird, off-the-wall sort of fantasy that will cause you bewilderment. Full of surprises and controversy, The Skin I Live In is a kitsch film about some damaged and troubled souls that will induce goose bumps in the viewer (and whether they are of pleasure or pain remains to be seen).

The Skin I Live In is released on DVD on May 23.

One thought on “dvd review: the skin i live in”