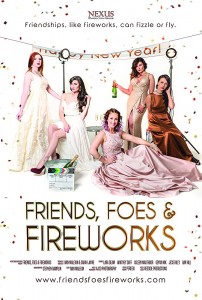 How did you spend last New Year’s Eve? Most of us go to a party or a festival, where we can kick back with champagne and friends. But filmmakers Sarah Jayne Portelli and Ivan Malekin spent NYE 2016 doing the thing they love most: making a film.

The result is Friends, Foes & Fireworks, a mumblecore film about a group of friends who get together on New Year’s and find old tensions are revived. ‘We’ve never really been ones to go out and party and get all worked up over New Year’s Eve,’ Ivan explains. ‘So we were thinking, what do we actually enjoy doing, we enjoy filmmaking, so why not take [the night] as a background and make a film?’

New Year’s Eve provided plenty of material for the film. ‘I think with change comes reflection, you reflect on yourself as a person, like was I a good person this year, what can I do better next year?’ says Sarah. ‘The whole New Year’s resolution thing comes up as well…that’s what we wanted to explore with these characters.’

The entire film was shot over just the one night in various Melbourne locations, making it an adrenaline-fuelled experience for the filmmakers. ‘It was really go, go,go, we had to hit certain marks,’ Ivan explains. ‘We had to be at the pier for the fireworks by midnight so it was rush rush rush to get all these scenes done, two takes maximum, move on. It was a crazy experience.’

Not only was this film made in just one night, but it was also entirely improvised. Instead of studying a script, actors prepared by learning in-depth character backgrounds. When the cameras were rolling, they had just a few dot points for each scene to rely on.

Why make a film this way? Ivan explains that traditional filmmaking can be time-consuming and expensive. ‘I just wanted to strip everything back to the bare essentials, work with actors we trust, just keep the crew at a bare minimum, and just film for the love of film,’ he says.

Making Friends, Foes & Fireworks also allowed Sarah and Ivan to explore a genre they love. ‘We’re really interested in mumblecore and characters, basically,’ says Sarah. ‘That’s what been fascinating for me, working with the actors and getting the characters down. Directing it is really cool as well because you get to see it come to life.’

The pair are now living in Malta, where they are continuing to pursue their love of filmmaking. When I chatted with the couple in September, Sarah shared her thoughts on the place of women filmmakers in the industry. She believes we should stop talking about ‘female’ directors and just look at their work for what it is.

‘I write female driven material, I am a woman and I know what needs to be discussed, so I use my positions to make sure this comes across and there really is no need for a label,’ she says.  ‘I am a director. That’s all.’

You can find out more about Friends, Foes & Fireworks here.