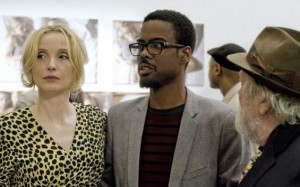 With 2 Days In New York, Julie Delpy has delivered a sweet and funny second instalment to the story of her character Marion, whose rocky love life and wacky family provide both humour and food for thought. First introduced in 2 Days In Paris, this time Marion is in New York. While the characters are mostly the same, it is not just the title city that is different in this follow-up effort from Delpy. 2 Days In New York is notably different from its Parisian precursor, and it could be argued that it is quite a bit better.

When we left Marion last, her relationship with Jack (played by Adam Goldberg) was not exactly clear, but it seemed that they were going to stick it out despite a miserable two days together visiting Marion’s parents in Paris. Now, 2 Days in New York begins and the audience learns that Marion had a child with Jack, but is raising the young boy while living with her new partner, Mingus (Chris Rock) and his own daughter. Her family comes to stay while she is preparing for a big art exhibition, inevitably straining her relationship with Mingus.

Marion, Mingus and their respective children are joined by Marion’s eccentric father Jeannot (played by Delpy’s real father, Albert Delpy), exhibitionist sister Rose (Alexia Landeau) and obnoxious ex-boyfriend (now Rose’s current flame) Manu (Alexandre Nahon). The guests shock Mingus and his family from the beginning— first with Jeannot’s distinct odour of sausages and refusal to bathe on a regular basis, and later with Rose and Manu’s interest in buying Central Park weed and having loud sex in the en suite. Marion’s mother has passed away in the time that has elapsed, which is an artistic imitation of life, as Delpy’s own mother Marie Pillet (who played Marion’s mother in 2 Days In Paris) passed away in 2009.

Marion deals with her mother’s death throughout the movie, which is a subtle but powerful thread of the story that feels very personal. The rest of the film though, is filled with a humour that is lighter and much more obvious than in the first movie. This is due in large part to the presence of Chris Rock as Marion’s boyfriend, whose incredulous reaction to the antics of Marion’s family and interactions with a cardboard Obama are very amusing. Rock plays a much more likeable character than Jack, and this balances out some of the annoying traits present in Marion. She can be slightly irritating, with her erratic behaviour being a strange combination of endearing and infuriating.

There are parts of the movie that would be most appreciated by those who have seen the first film, such as the continuation of the story of the activist “fairy” (Daniel Brühl) and the reappearance of Jeannot’s tendency to key cars to make a statement. The overall themes of the movie however, need no prior knowledge. Love, relationships in the messy 21st Century, and dealing with family and loss are all explored in this quirky film, and it is lots of fun to watch.