film review: beauty and the beast 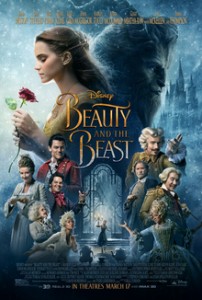 Beauty and the Beast is another Disney reboot. You’re probably expecting me to say: get over it Disney I have seen this before! But I am not going to say that, because frankly I don’t care. Why? Well because this is a fairy tale. Fairy tales are always being retold and in each retelling, they offer something new and different (we hope). So, the fact that a live action Beauty and the Beast exists doesn’t offend me greatly; plus, it shouldn’t surprise anyone at this point that Disney is a consumerist money-making Mc-Juggernaut (see for example my sister’s adult sized Lion King jumper).

With Emma Watson in the lead role, Beauty and the Beast promised a lot in the hype that swirled up before its release.  This movie promised feminism, and it promised exposure for minority groups.  It promised us it would be the most beautiful swirly equality-filled new-wave Disney extravaganza! Well I thought it did.

Beauty and the Beast is not Disney’s first soiree into the world of feminism: in Frozen sisterly love beats hate, Mulan defeats all the Huns, and Maleficent is a heaps-strong-bat-fairy-thing played by Angelina Jolie and if that is not girl power I don’t know what is! But I remained unsure about Disney’s ability to modernise the kind of feminism which is within Beauty and the Beast.

Our lead is Belle, who is beautiful but cares mostly for books and adventures. She is Disney’s smart princess. I really do applaud a bookish princess, but I don’t think brains instantly equate to current feminism. The ongoing problem with the story of Beauty and the Beast is the power dynamic between Belle and Beast. Yes, Belle is smart, but she is always under the beast’s control as his prisoner. The whole premise of the movie is people being different to what they appear –  he may be a brute but fix him up and your love will civilise him. The result is uncomfortable viewing as an adult, as Belle is falling slowly into a Stockholm syndrome love affair with her vicious captor. Innocent me hopes that this isn’t the case but I think I must face that it is. Plus, no man would ever be encouraged to see a woman’s inner worth despite physical appearance: no love is big enough for that.

Emma Watson is the perfect Disney princess for a company trying to rebrand its image as one of increasing sensitivity to contemporary issues. She is an avid feminist and her work for UN organisation HeForShe has done a great deal in promoting the feminist message in a positive and inclusive way. It is easy, then, to draw a comparison between the feminism of Emma Watson and the feminist status of her character Belle. Belle is strong and independent but she is still unable to escape the confines of the man who keeps her, mostly because she is too nice. I like Emma Watson and I think her heart is in the right place but her feminism is not angry, it is passionate but vague. Her feminism is a safe feminism, it is one which constantly seeks to make feminism OK for men. The very name HeForShe suggests a focus of building men up – ergo fixing the beast rather than just fighting the feminist fight.

The Beast himself (Dan Stevens) is given a slightly new twist in this film as he has a small snippet of a backstory not seen in the original. This story attributes the beast’s anger as the fault of his father. This suggests that Beast is not eternally bad but has had badness thrust upon him; this is pretty much the plot of every bad-man-meets-good-woman story ever (see Jane Eyre and 50 or Shades of Grey). It is a nice thought to think that we can change these men with love but what does that mean for the woman? That the anger of men is always the burden of women? Um…no thank you!

My favourite part of Beauty and the Beast has always been the Gaston song, and this film’s rendition does not disappoint! I like this song because Gaston (Luke Evans) is such a man’s man: he is “covered in hair” and he uses “antlers in all of [his] decorating”… the excess is hilarious. Gaston is such a different Disney villain. He is charming and handsome and popular and this is what makes him dangerous. The charismatic Gaston is patriarchy’s influence on the masses personified. Others follow him as behind this mask he is a man of hate and violence and compulsive mansplaining.

Gaston’s biggest follower is LeFou (Josh Gad). LeFou is a character I had not given much thought to until about a month ago, when Disney announced that LeFou was to be an openly gay character – cue conservative drama. Here is LeFou’s story of controversy that people are stamping their feet about: first LeFou is not openly gay, as promised, but he is very camp and flamboyant. Second, LeFou’s loyalty to Gaston is suggested to be an unrequited love. And third, LeFou eventually rejects the villainous life, which he sat uncomfortably within, and the audience is presented with a six second dance scene between LeFou and another man (who was earlier attacked with women’s clothing and let out an open smile). Six seconds of gay celebration is what Disney is patting itself on the back for. Six seconds that can easily be edited out, six seconds that can be read as a joke, only six seconds of almost equality and that is all.

Beauty and the Beast is fun and bright and I smiled a lot. Kids will love it. Its politics however are just sitting there like an empty tribute to modern progressive thought. Fine, a movie can’t be everything and bless ‘em they tried! I hope that Disney can stop being safe someday. I had better watch the upcoming remake of Aladdin that film could be the one for me… wow these movies have messed me up.