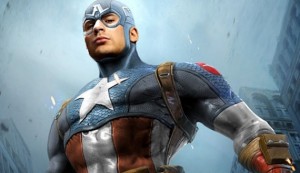 I can see how a die-hard Captain America fan could be vastly disappointed in the film adaptation of what I’m sure is a much-loved comic book hero. Luckily for me, I had no previous Captain America knowledge to irk me through its big-budget Hollywood film treatment, and I can happily say that overall it wasn’t a painful experience.

Steve Rogers (Chris Evans) is a weedy, asthmatic runt who wants nothing more than to be a soldier for the US Army during World War II. The fact that they made the smoking hot Chris Evans this character, was both a small outrage and massive kudos to the special effects team. No mean feat. To go into the plot of this movie would be hectic. While the character relationships and plot points are well explained to a novice like me, putting it on paper would be a nightmare. Let’s just say that some new/old friends (namely Dominic Cooper as Howard Stark – Iron Man’s dad), manage to make Chris Evans hot again, and he’s thus turned into Captain America.

Captain America’s arch nemesis is played by Hugo Weaving, who does all he can with the limited range that super-Nazi Johann Schmidt allows. Another key player is Hayley Atwell as Peggy Carter, who is somehow Captain America’s boss. As a British woman in the US Army, her presence is perplexing but delicious. Atwell holds the ground for basically the only female role in the film, and she does it with style and perfect hair. She shoots people, stands up for herself to Tommy Lee Jones’s character (in fine typecasting as the hard nut Colonel with a heart of gold), and the sexual tension between her and our hero is, at times, fantastic.

You can’t have a film called Captain America without it being disgustingly patriotic. As a history student, I was concerned, but I really enjoyed the balance between patriotism and satire that director Joe Johnston tinkers with throughout. It isn’t until the end of the film that you realise what you’ve just sat through – a two hour prelude to the 2012 film The Avengers. The tie-in is quite clever, yet you still feel like you’ve just sat through something big that Hollywood churned out so that they have the funds to make something bigger. So if you fancy the idea of Captain America being joined by Iron Man, The Hulk, Thor and friends, then stay for the end of the credits: it’s a comic-book geek’s wet dream.