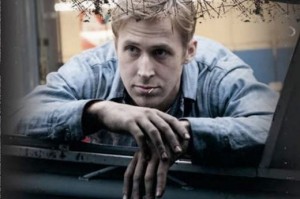 Drive tells the story of a moonlighting misfit, who by day is a stunt driver and part-time mechanic and by night plays the accessory and getaway driver to the odd crime. Starring Hollywood heartthrob, Ryan Gosling, the young actor plays another left-field and at times difficult character. He is a loner and a man of few words surrounded by a cloud of mystery and melancholy.

“Driver” as he is simply known, falls for his neighbour Irene (Carey Mulligan), who acts like a single mother to her young son while her husband is away in prison. When her partner Standard (Oscar Isaac), returns home needing money for the gangsters that had protected him while he was inside jail, Driver steps in. Like a knight in shining armour, Driver offers to help Standard make a getaway after robbing a pawnshop. But none of this goes to plan and all goes to hell in a head gasket.

Nicolas Refn directed Drive and he had the cast live and work together for the duration of the shoot. By day they’d labour together on the script and shoot, and by night they’d go out riding. The cast are an accomplished lot with the archetypal mobster characters played by Ron Perlman and Albert Brooks while Christina Hendricks plays the flame-haired accomplice in the film’s centrepiece i.e. the failed heist.

The ideas behind the story are certainly nothing new and it takes inspiration from the similarly named seventies film, The Driver. It also has a retro flavour as the opening titles, costume and synth-laden soundtrack play-out like something from the 1980s. Add to this some shots of a drab LA (light years removed from the La-La land of Hollywood glamazons) and you’ll find few signposts to indicate that this was actually shot this century.

As to be expected, the movie includes lots of driving sequences and is a volatile, rough-around-the-edges drama. But perhaps its biggest pitfall is that it can occasionally seem a tad muddled. For a start, it is too subtle and not glitzy enough to be a Hollywood blockbuster but it also has one too many big names to be truly independent. But its biggest problem is that it is hard to pigeonhole because it seems like it’s trying to be a car film, a gangster flick and even an old-fashioned tale of romance. As a result, it comes across as a tad ‘unsure’.

Overall, Drive is a slow-burning and nuanced affair punctuated by a bold attitude and episodes of violence. It has very little spoken dialogue, which means that some people will find it arty and cerebral, while others will find it empty and shallow because it doesn’t cross every “T” or dot every “I”. If anything, it’s a certain contender for 2011’s most polarising ride because it’s not always a smooth journey and seems to be about everything and nothing, in equal measure.

One thought on “film review: drive”