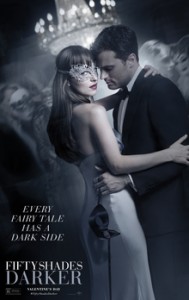 Fifty Shades Darker, the second film in the Fifty Shades trilogy, picks up where the last movie left off. Anastasia (Dakota Johnson) has broken up with Christian (Jamie Dornan) and is pursuing a career in publishing. But it’s not long before Christian shows up in her life again to convince her that he’s a changed man and wants her back. But has he really changed? While he promises no more ‘rules or punishments’, for the most part he retains his desire to control every aspect of her life – her finances, diet, and work environment, for example. She pushes back, resisting this control and hoping to create a more equal relationship this time around. There are a few obstacles in their way, though: two women from Christian’s past attempt to drive the couple apart, and one of the men in Ana’s life threatens her safety.

While these narrative complications should create some tension in the film, they end up falling flat. The inclusion of women from Christian’s past allows the film to devolve into catfights and emotional breakdowns as they all fight for his affections. It’s painful to watch, because it divides the female characters into predictable, sexist archetypes: “good” girls like Ana, and “crazy bitches” like Elena (Kim Basinger) and Leila (Bella Heathcote). Furthermore, it means that these characters’ entire lives appear to be completely consumed by their desire for Christian’s validation, approval and love. And why? There’s little in the film to suggest that Christian actually has a personality, or endearing qualities of any kind. Sure, he’s got lots of money and (apparently) the ability to make women come in mere seconds, but that’s about all. It’s tedious, lazy storytelling. More than that, the sexual politics are tired and frequently offensive.

But let’s be real, is anyone really watching this film for the plot? For those audience members tuning in for the sexy times, you’ll be pleased to know there is a fair amount of sex in the film. On the downside, the sex scenes can be summarised thusly: BORING AF. As in the first film, these scenes are dry, mechanical, unimaginative, and distinctly vanilla for a film supposedly about all things kinky. Throughout the film, I couldn’t get the episode of Seinfeld where Elaine hates The English Patient out of my head – ‘those sex scenes, please! Gimme something I can use!’ There are things to praise about these scenes, like the repeated representation of cunnilingus (ridiculously brief as it may be), and a greater focus on Ana’s agency than in the first film (‘I want you to spank me,’ ‘I want to try this toy,’ etc. etc.). Also, Dakota Johnson wears some very pretty knickers and I would like one of each pair please and thank you.

While the film is told from a female protagonist’s point of view, and marketed towards a predominantly female audience, James Foley’s (After Dark My Sweet, At Close Range) direction focalises the action through a distinctly male gaze. In the sex scenes, there are lots of lingering close-ups on Johnson’s backside and breasts, directing the spectator to see the encounter from Christian’s perspective rather than hers. If, as the film would like us to believe, Christian is an irresistible babe who turns the heroine on like no one else ever has, I want to actually see and feel that. I want lubricious, hypnotic shots that pan across his body in intimate detail; I want the spectacle of his erotic appeal substantially and meaningfully explored, so that I can inhabit Ana’s desiring gaze and perspective. This would give us an account of their sexual relationship from a female point of view. But because the film, for the most part, refuses the agency of her look and instead insists upon looking at her, we cannot visualise Ana as the holder of the gaze; she is its object. In other words, we get a sense of Ana as a desired object, but get very little insight into her as a desiring subject.

While there is one brief scene in which Ana watches a topless Christian working out, it isn’t really enough to make a difference to the film’s overall gendered relations of looking. For the most part, we get mere glimpses of his body, even in sex scenes; indeed, he often remains clothed while she is fully undressed. As a result, his body is unattainable and unknowable, keeping the female spectator at a distance rather than inviting her into intimate contact with it. Ultimately, my sense is that we’ve seen more than enough films in which women are put on display and objectified while men perform a masculinity that is all about action and power, and a refusal to be open, vulnerable or acted upon. We need more representation that breaks down these rigid gendered dynamics in order to invite a female desiring gaze at the scene of eroticism. Unfortunately, Fifty Shades Darker doesn’t quite get there.

Dr Athena Bellas teaches at the University of Melbourne, tweets at @AthenaBellas and blogs and podcasts at teenscreenfeminism.wordpress.com.