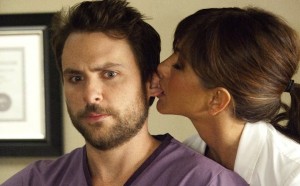 If Horrible Bosses accomplishes anything, it takes the halos off some of
Hollywood’s most talked about personalities and twists them into knots. For those of you who have a hard time accepting Jennifer Aniston in any role other than Rachel in Friends, you may also have a hard time hearing her say “can you see my pussy?” and “f*ck my dirty mouth”.

Horrible Bosses sees three buddies played by Jason Bateman (Arrested
Development), Jason Sudeikis (Saturday Night Live) and Charlie Day (It’s Always Sunny in Philadelphia) convince themselves their bosses are ruining their lives to the point where they must be killed. Kevin Spacey, Jennifer Aniston and Colin Farrell play their bosses, as you have never seen them before… except for Spacey because he’s always kinda mean. Aniston, whose ‘hotness’ increases with age, is a foul-mouthed nymphomaniac dentist, while Farrell (or at least a balding, pudgy greased-up version of Farrell) is a douchebag cokehead manager and Spacey is a sinister, manipulating business executive. The buddies seek the assistance of a hitman (Jamie Foxx) and begin their quests of “justified murder”. The events that unveil are somewhat predictable, yet there is enough originality and genuine comedy to keep the audience engaged.

The strength of the film is undoubtedly the bosses, with the actors obviously
relishing the chance to be naughty. This is delicious for the audience as you
can’t help but love the genuine horribleness of these bosses, but you still also hope that they die. The three buddies’ antics did get a little bit repetitive, but the performances are still strong against the obvious star-power behind Aniston, Spacey and Farrell. Having said that, Day’s voice somehow ended up getting higher and more hysterical as the movie progressed. Luckily, Bateman and Sudeikis’ onscreen chemistry was dynamic enough to keep it together.

Horrible Bosses is horrible enough to make you cringe, but clever enough for
some genuine laughs. And again I implore, if you think Jennifer Aniston is an angel –avoid this movie. You will never watch Friends the same way again.