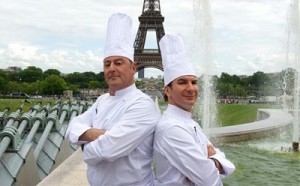 There aren’t many professions that incite an overwhelming sense of passion in employees. Enthusiasm perhaps, but you don’t find too many accountants or lawyers that love their work to the point of obsession like people working in the arts or with food. Le Chef – the latest offering from the producers of The Artist – stars two such colourful perfectionists who come together when the heat is on with hilarious results.

Jean Reno stars as Alexandre Lagarde, a Michelin star-awarded chef and much-loved expert cook renowned for preparing traditional cuisine. Despite an affectionate fan base of loyal followers tuning into his regular TV cooking program, off-air he battles with a meddling boss – Stanislas Matter played by Julien Boisselier – who wants to replace him with a younger proponent of molecular gastronomy.

Matter is a classic villain working hard to undermine Lagarde. The former plans to damage the work by the latter, so he’ll lose a star and enable the restaurant to employ a younger, more modern chef. In addition to the professional heat Lagarde faces, his family life is also suffering from years of neglect as he put and pursued his career first. Plus he’s plain out of new ideas when it comes to food, that pot is well and truly empty.

But this authority isn’t the only cook with problems. Jacky Bonnot (Michaël Youn) is a self-trained and opinionated chef with very ambitious ideas about haute cuisine. These thoughts and high standards get him fired from countless, menial kitchen jobs because his grandiose recipes are lost on the sausage and steak masses. So his pregnant girlfriend (Raphaëlle Agogue) attempts to save the day by getting him a job in a retirement home where he will toil as a blue-collar labourer. But Bonnot can’t leave his beloved kitchen work behind.

Through a chance meeting, these two talented chefs meet and the master takes on the grasshopper as an intern, eventually dubbing him the ‘vegetable whisperer’. They are an odd couple with an excellent dynamic and chemistry. Youn’s acting actually reminds me of Robin Williams in Mrs. Doubtfire (especially in the racially stereotyped scene in the middle when he impersonates the wife of a Japanese dignitary by wearing the kind of regalia you’d easily imagine a geisha girl wearing). Youn proves he is an excellent comedian and the character is a colourful foil to Lagarde, particularly when he teaches the latter about the importance of family and love, life’s richest and most fulfilling desserts.

Le Chef is peppered with conflict, charm and affection. The laughs come quick and easy while the editing is tight (at just 85 minutes) ensuring no fat has been left on the bones of this quaint, French comedy. There are also lots of mouth-watering shots of succulent food, just like those found flavouring Julie & Julia and Chocolat, among others.

Although there are moments when Le Chef is a tad over-the-top, there is no denying that this is one fine romp through some earthy, culinary delights. Like a good roast, Le Chef is hearty and satisfying and will have your spirit rising as high as a perfectly light soufflé – simply enjoyable and tasty soul food in equal measure. Bon appétit!