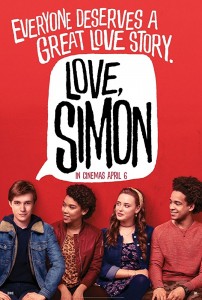 You weren’t allowed to be gay at my high school, but of course that never stopped anyone – my best friend included. We’d known each other for five years, been out of school for one, when she came out to me. It wasn’t anything major on my end, she was my friend and her sexuality was not about to change that. We may have been educated in a highly religious setting, but for the most part our personal lives were populated with (small-l) liberals. Even so, for her, coming out was a gut-wrenching, soul-baring experience she felt was undeserved. After all, why didn’t straight people have to suffer through this?

Fast forward to 2018, and I found myself showing her the new trailer for teen rom-com, Love, Simon, where the titular character echoed her exact sentiment: ‘It doesn’t seem fair that only gay people have to come out. Why is straight the default?’ Instantly, her eyes lit up and she turned to me. ‘When can we see it?’

Based on the hugely popular young adult novel, Simon vs. the Homo Sapiens Agenda by Becky Albertalli, the film adaptation follows Simon (Nick Robinson), your average, ideal American kid. He has his mixed bag of cool friends, some nice liberal parents, and for all intents and purposes – a pretty comfortable life. He just has one, big secret: he’s gay. Pretending to be straight all this time is his way to preserve the person he has always been to the world, but when he begins an online flirtation with an anonymous, gay student from his high school, he starts to open up to the idea of finally being his true self.

I first became interested in Love, Simon because coming-of-age films have always been my bread and butter. I grew up on a steady diet of John Hughes gems like The Breakfast Club, Pretty in Pink, and Ferris Bueller’s Day Off. There’s nothing I love more than seeing awkward teens fight the system, discover themselves, and experience their first bouts of heart-crushing love. But Love, Simon was a new entry to the genre I was particularly eager to see, not least of all because of its showcasing of a non-heterosexual romance.

Considering it was only in December of last year that same-sex marriage became legal here in Australia, it’s easy to understand why big production companies have been hesitant to champion LGBTQ+ stories to western viewers. Love, Simon is a new step for 20th Century Fox to take and although it’s taken in line with the changing times, there is undoubtedly a big risk of backlash. By entrusting it to eminent showrunner Greg Berlanti (Dawson’s Creek, Riverdale), they have inevitably decided to go big or go home, as Berlanti’s film does not shy away from mainstream audiences but actively courts them.

Love, Simon reflects the same polished veneer as its heterosexual predecessors, from its soundtrack packed with swooping pop anthems to its picturesque depiction of teenage life. As a result, the film walks a fine line, as it balances the hopes of attracting a wide audience with ensuring LGBTQ+ viewers might see a protagonist reflective of their own experiences. The script, penned by This is Us writers Isaac Aptaker and Elizabeth Berger, handles this impressively by helping to educate wider audiences in the intricate difficulties of growing up gay without making it feel preachy.

Nick Robinson as Simon is incredibly relatable as he tries to figure out who his anonymous crush may be, and he is supported by a cast of friends that offer moments of saccharine sweet bonding. Even so, in the background of Simon’s nuanced story of identity and sexuality, is a lifestyle that often seems far more idyllic than it does realistic. Although this is nothing new when it comes to the genre of teen films, it did make Simon’s constant declarations of being ‘just like everybody else’ seem a little rich. Likewise, there’s definitely cliché-heavy elements to the film that give way to moments of severe cringing (aka the constant references to current teen trends #onfleek).

But Berlanti offers audiences a closer look at coming out and he does not shy away from the harder issues. The final act of the film tugged hard at the heartstrings and had many in my preview screening in tears. That’s not to say I think everyone will like Love, Simon: for some like my friend, the slick packaging just detracted too much from the underlying message.

To this end, Berlanti had this to say about the film in an interview with Popsugar a few weeks ago, ‘When you’re helping create change – there are some people it’s not gay enough for, and some people it’s too gay for. All you can do is just keep doing your best, and keep doing what feels truthful to you.’

Ultimately, this is where I come to land on Love, Simon. It may not be revolutionary in the crowded coming-of-age genre, but that’s precisely why it is so ground-breaking. For teens growing up in 2018 and beyond, Hollywood has now given them a love story of inclusion. In many ways, Simon is much like the John Hughes-esque incarnations that have come before him; he struggles with the same sorts of issues about growing up and figuring out what you want to be in this world. Now that may be too much or too little, but it’s a start. And if it helps more struggling teenagers out there come to terms with who they are, well, to me that’s a perfect beginning.

Kellie Amos is a copywriter and uni student from Brisbane, you can find her on Instagram as @kellie.am.