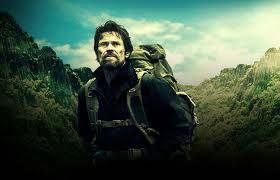 The Hunter tells the story of hardened loner Martin David (Willem Dafoe), sent to remote Tasmania to find the elusive and apparently extinct Tasmanian Tiger. Martin is on a mission for a military organisation that wants the tiger because it can stun its prey. In other words, they want it dead.

When Martin arrives he begins his hunt, but comes across many things he wasn’t expecting to find. There’s a mystery surrounding the disappearance of scientist Jarrah Armstrong, entrenched tension between forestry workers and environmental activists and, most surprising of all, a family that he actually cares about. Lucy Armstrong (Frances O’Connor) is dealing with the loss of her husband, and her two children Sass (Morgana Davies) and Bike (Finn Woodlock0), are still waiting for him to come back.

Martin becomes increasingly caught up in the emotions and anguish of his host family and the town’s rivalry, making his mission much more complicated. As he follows more and more clues in his search, it becomes less and less clear what he would do if he did find the tiger.

For the first fifteen minutes or so, the movie is slow, with no hint of the depth and emotion that is to come. It seems that this is just going to be another film that promotes Tasmanian stereotypes. Yet as Dafoe’s character softens and the mysteries of the town folk deepen, it begins to draw you in. Slowly, but surely.

The turning point is when Martin and Bike turn the power back on at the Armstrong’s house – as the lights and music come back to life, so too does Lucy – and her connection with Martin begins in the most heartbreaking of ways. This moment is the first of many intensely powerful scenes, which force you to invest in the characters and feel their gut-wrenching emotions. After that, there’s no going back.

The film successfully captures the mystery and sadness surrounding the Tasmanian Tiger. The Hobart Zoo’s footage of the last tiger will be familiar to Tasmanians, and the heartbreaking and nostalgic quality of this story is transferred onto the big screen with prowess. There’s a clear link between the idea of the tiger and Martin himself: both are supposedly alone in the wilderness, both are surrounded by mystery and both seem unreachable (however there is a hint of something more).

Animal lovers will cringe at the brutal way in which Martin kills native Tasmanian wildlife as he sets traps for the tiger. This ugliness within the beauty of the Tasmanian landscape is a powerful contrast, making each extreme more profound. The cinematography is nothing short of breathtaking, depicting the wilderness that is rugged and beautiful- not unlike Dafoe himself.

Shocking and devastating twists lead up to an ending that is sure to have an effect. It might have been all the more special to me because it was filmed in my little old island state, but even without that connection, The Hunter has much to offer.