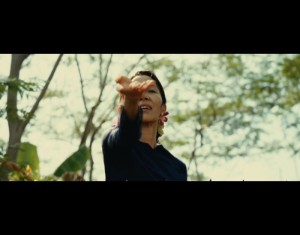 Earlier this year cinemagoers were treated to a look at life in Maggie’s farm in The Iron Lady.  Now it is time for an intimate portrait of The Steel Orchid. The Lady tells the story of the Burmese-English political activist, human rights advocate and political prisoner, Aung San Suu Kyi. Known to her supporters as Daw or The Lady, she helped spearhead Burma’s democracy movement.

Director Luc Besson (Léon, Nikita) brings this slow-burning biopic about an iconic and complex woman to the big screen. The story briefly touches on her early years in Rangoon. As a child she would learn about the assassination of her father – a general who helped negotiate the country’s independence from British rule. Unfortunately, he was killed just as this was being finalised and a military junta would assume charge, where an oppressive dictatorship was the order of the day.

The film – while informative – is a tad over-simplistic on the important, historic details. Instead, it tends to focus on the tense and emotional aspects of the ensuing years. After living abroad in England, marrying a “Foreigner” and becoming an “Oxford housewife,” Aung San Suu Kyi returns to Burma in 1988 to nurse her ailing mother. She hadn’t planned to spend very long there but her mind changed after witnessing the aftermath of the 8888 uprising where peaceful protestors and innocent civilians were slain or injured by the heavy-armed military. Her fellow country-people felt that thanks to her ancestry she held the key to install peace and freedom in the country and this culminated in the 1990 elections where her party won an overwhelming majority of the seats, a result that made her president-elect.

The military had other plans though and would place her under house arrest for a number of obscure, arcane laws. She would eventually spend 15 of the following 21 years under house arrest and only get to see her husband and sons on a handful of occasions. In this time she would become the first woman in Asia to win a Nobel Peace Prize for her non-violent and uncompromising struggle to assist humanity, like a more contemporary Ghandi or Martin Luther King.

Michelle Yeoh does an excellent job of negotiating this extraordinary lady’s different roles of mother, wife, daughter and noble leader. Similarly, David Thewlis gently portrays her supportive husband, Dr. Michael Aris and when matched together the pair reveal the intense turmoil the real-life couple experienced as their love endures despite the physical and political boundaries. It is heart wrenching to see the selfless sacrifices this pair will undergo as they compromise their own happiness for the greater good of the Burmese people.

The film is beautifully shot and provides an outstanding look at the relationship dynamics between family and country. It is tense, emotional and educational. At times it relies a little too much on the kind of clichéd Eastern wisdom typically seen in fortune cookies and k?an. This is coupled a rather slow-pace, which means that the rendering of the film could’ve been improved overall.

The Lady ultimately covers rather difficult subjects in a subtle and dignified way. It is an incredible, real-life story that is equally dramatic, maudlin and inspiring. While a tad flawed, it is worth the admission price alone to witness the story of a brave, genuine and uncompromising heroine. A living legend, this is one important history lesson if there ever was one.