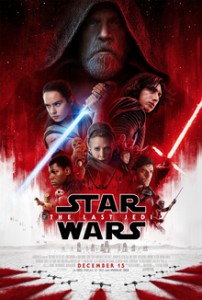 At midnight on a fateful summer evening, Star Wars fans lined up to get the first look at the new movie, with hopes high and adrenaline pumping through their veins. As an enthusiastic fan myself, I was amongst the rabble of strangely clad movie-goers in Melbourne, barely managing to keep myself awake to witness my first ever midnight screening.

Given the popularity of the franchise, and the high expectations that come along with it, I was expected to be dazzled by the latest instalment. It received high praise from many online critics, which is a considerable achievement for an action-adventure movie. And Star Wars: The Last Jedi was great as a stand-alone film. The fight scenes were well-executed, the acting was on-point as always, and there was just enough tension to keep you on the edge of your seat. But – and this is a big but – as a film that is part of a larger storyline, it did not do its franchise justice.

The Force Awakens left the series open for a multitude of twists and turns, with many questions left unanswered and many secrets left untold. Yet Star Wars: The Last Jedi chose not to probe into any of these areas. Instead, they filled most of the movie with an intergalactic chase, interspersing it with an occasional look into Rey’s (Daisy Ridley) Jedi training and a cantina-esque casino scene. Most of the movie is filler material, building up to the rather anticlimactic finale that fails to live up to normal Star Wars standards. Over the entirety of the movie not much really happens in terms of plot development, and it almost feels like a reboot of the original trilogy, with Darth Vader’s character replaced by an angsty teenager (Adam Driver as Kylo Ren).

Disney’s comedic touch is another element which changes the tone of the movie. Where the original trilogy was a light-hearted, action-packed adventure in space, the newer movies have a few more humourous moments that have seemingly been added in by Disney. That’s not to say they’re not funny, but when I go to see a Star Wars movie I don’t exactly go for the laughs. It probably makes it more enjoyable for the young audience members, so let’s hope it encourages a new generation to become just as obsessed as the rest of us.

Of course, all the same nostalgic characters have been left in for the die-hard fans, with C3PO, R2D2, and both Skywalker siblings making an appearance. The Millennium Falcon is just as clunky as always, and Princess Leia (Carrie Fisher) still has the can-do attitude and strong spirit that has made her an icon for girls all over the world. There were more cute animals to give it that “aw” factor, and a glimmer of romance to tug at the heart strings. The ingredients are all there to make an excellent film, yet somehow the plot was just lacking that touch of ingenuity.

To all those who thoroughly enjoyed the movie: I’m glad you did. In general, it was an excellent film, as films go. But as a devoted fan and someone who spent the past week binge-watching the original trilogy, it’s just not quite up to par. It was enjoyable, and a lot of fun, but didn’t quite give me the feeling of satisfaction that I like to get from a Star Wars movie. Given the success of the past two movies, there’s certainly room for improvement, and we can only hope that Disney picks up their game before the final instalment.

Jessica Kennedy is a Melbourne-based writer and uni student. She tweets @_jess_kennedy and blogs here.