film review: the perks of being a wallflower 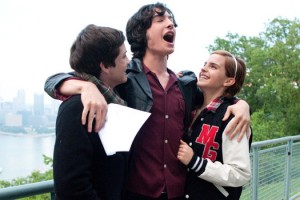 The Perks of Being a Wallflower is the story of a group of teenage outsiders trying to find their place in the world, while dealing with the realities of growing up and being different. At the centre of the film is newcomer to the group, Charlie (Logan Lerman), who has just started high school.

Charlie is bookish, quiet and clever. He has a past that has been plaguing him and is fighting against mental illness. His loving family want him to be happy, but his sister Candace (Nina Dobrev) has problems of her own that remind Charlie of disturbing memories.

Charlie  falls in with the unique and interesting pair Patrick (Ezra Miller) and Sam (played by the amazing Emma Watson). Like Charlie, they are asking themselves who they are and whether they will ever be okay with the answer. For a while, Charlie has found his place with them and their friends, but his feelings for Sam and his own personal struggles get in the way. By joining this group of older friends, Charlie is exposed to a teenage world of sex, drugs and total confusion- but he is also introduced to people that will change his life for the better.

On its surface, the film pulls off a stylised indie/retro theme that will appeal to many modern-day hipsters. Mix tapes, records and funky clothing give the film a sense of sad nostalgia. Beyond that, though, its themes of growing up and feeling like a misfit are timeless. Although the story focuses on teenagers in high school, its serious side and heartbreaking moments make it anything but just another teen movie.

The acting is a big part of what makes this film stand out. Emma Watson proves that she is absolutely an actor of substance by creating a character who is flamboyant and interesting on the surface, but vulnerable and unsure underneath. There is certainly no chance of Watson becoming one of those typecast actors who can’t escape their successful beginning. But it isn’t just Watson that shines in this story- Ezra Miller as Patrick is captivating, and Lerman as Charlie is the perfect character to tell the story.

The screenplay is wonderful, with some narration from Charlie filling in gaps and giving the story deeper meaning, alongside memorable conversations between characters. After realising her boyfriend is not who she thought he was, Sam asks Charlie “Why do I, and everyone I love, pick people who treat us like we’re nothing?” It is moments like these that make this film so special and may make you rush to the bookstore to buy the book upon which it is based (written by Stephen Chobksy, who also wrote and directed the film).

The final half an hour is emotionally exhausting, but the ending is rather beautiful. As a whole, the film is so enthralling, believable and relatable that it is easy to become totally absorbed in the story and its characters. The Perks of Being A Wallflower is the kind of movie that will be hard to forget.