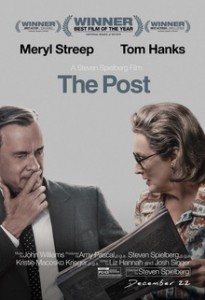 The phrase ‘backwards and in heels’ is derived from a cartoon by Bob Thaves drawn in 1982. Specifically, the cartoon stated that Ginger Rogers performed everything that Fred Astaire did in their films, except backwards and in heels. This phrase has come to emulate the recurrent struggles of women working in a patriarchal world, as well as within Hollywood itself. Steven Spielberg’s newest film The Post places his female protagonist in the highest of stilettos and has her run a marathon backwards.

Spielberg’s latest biopic unpacks the events leading up to and following The Washington Post‘s publication of the Pentagon Papers in the 1970s. Significantly, Spielberg centres in on the relationship between the paper’s publisher Kay Graham (Meryl Streep) and her editor Ben Bradlee (Tom Hanks), contrasting their experiences within their worlds of work and home.

The film itself is quite remarkable in its ability to showcase the work and talent of its filmmakers and actors through exquisite execution. From the get-go, the film moves with a surging sense of urgency, communicating the functioning of the documentation-reliant press in 1971. They are literally chasing stories, in a race to publish the next one before a competing paper does just that, with The New York Times leading the competition.

We come to know characters through their interactions with other characters, with no frivolous exposition telling the audience the background of said characters. As Kay walks into a dining room to meet Ben, the single two-shot moves to subtly demonstrate that she is the only woman in the room, whilst their conversation establishes their conflicted background. Kay, portrayed by Streep, is undeniably charming. She embellishes Kay with small nuances such as removing her large earring when answering the phone or constantly clutching her reading glasses in one hand. Each nuance deepens Kay’s character and by extension, the audience’s impulse to root for her success.

A clear polarity is exhibited between the worlds of workplace and home in which Kay and Ben reside. The newsroom is presented as cold and stark, with a constant hubbub of voices and typewriters. Whilst Kay’s grey suit and glasses help her blend in, the behaviour of the men who surround her prevent her confidence. Whilst this is her newspaper and has ideas to help it thrive, they don’t hear her ideas in board meetings until a man voices them for her. Kay is reduced to a kind of timidity which I’m sure many women have felt in a room full of fervent men. Kay sees what her female friends call her ‘day job’ as quite arduous, the antithesis of her home life.

Kay’s home, by contrast, is deliberately inviting and warm. She lives with her daughter, played tenderly by Alison Brie, and her granddaughters. Her home goes beyond feminine into maternal, with soft, warm light bathing the delicate, classic furnishings. Most significantly, Kay is entirely one with her domain, moving with ease through the spaces that she inhabits and invites guests into. She is constantly hosting dinners and parties, in complete opposition to the reduced persona which she donnes in the newsroom. This is the world that she has built and it’s entirely hers, a fact that she demonstrates each time Ben comes to interrupt her at home with communication about the paper.

Ben Bradlee’s environmental experience is entirely the opposite of Kay’s. Spielberg shows his audience the non-verbal image of Ben coming home from a busy day at work, his wife (Sarah Paulson) asleep on the couch. Whilst his home is equally as inviting as Kay’s, he doesn’t know what to do with himself in his home space. Within only a short period, Ben is lost with no work to be done when the phone rings and he is called back to the newsroom. There, Ben stands with his foot on his desk, with Spielberg placing the camera from below. He is dominant, commanding: because he can be.

The pivotal scene brings Ben Bradlee and a band of detracting co-workers to Kay’s home – with the choice of whether to publish the papers. Kay is hosting a gala of sorts and is wearing a swishy gold caftan. As she and the men are closed into her home office, Kay maintains an unusual air of confidence, even when faced with a decision which could destroy her career as well as her family’s legacy. Conventionally, there is an expectation for some sort of plateau in Streep’s performance, but her deliverance of her decision is entirely understated, evocative of her previously lacked confidence.

Kay’s demeanour at work is renewed. It’s clear that through her decision, she has regained ownership of The Washington Post. There is a notable shot which follows Streep walking through a sea of women through the doors of her court hearing into a room of men. There is still a clear divide between these two groups, but Kay can thrive in both worlds whether she wears grey or paisley.

As I mentioned earlier, the execution of this film, notably in cinematography, production design, editing and music (by composer John Williams) is quite excellent. The performances, especially by Streep and Hanks but also by the (filled to the brim) ensemble are really wonderful. The film defies expectations of plot and performances. However, like many of Spielberg’s films, the third act following the narrative crux of the film persists at length in order to link a subsequent historical event. This is perhaps unnecessary as the film’s most absorbing elements reside amongst this group of characters, not what lies beyond the narrative.

If anything, this film is timely. Production followed 2016’s presidential election, with a decided focus on a woman’s endeavour through a man’s world which cannot be trivialised. Whilst audience members will take many diverse messages away from The Post, this film truly spoke to my yearning to see women’s stories told in cinema with as much detail and development as demonstrated in this film.

Ella Pace is a film writer based in Melbourne, Australia. She tweets @_ellapace and blogs https://flickerthoughts.com/.