film review: the shape of water 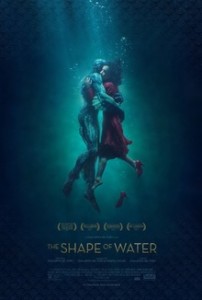 ‘Water can be any shape, it just depends on the container,’ my brother eloquently said as we drove to the cinema. It was a good point – as he predicted,  the new Guillermo del Toro film The Shape of Water fits into many movie genre moulds. It is a monster movie, an arthouse film, a drama, a romance and a fairy tale – all whilst being its own unique, weird thing.

Best known as the director of the award winning Spanish language film Pan’s Labyrinth, del Toro also directed Hell Boy and Pacific Rim. Pacific Rim is a terrible movie (nerds you can come plead your case… but come on you just like it cos there are big monsters in it), BUT like all of his movies it has moments of surprizing genre inversion. In this way you can see each of these ‘monster movies’ as leading to The Shape of Water.

The film is set back in the 1960s Cold War. Our lead Eliza (Sally Hawkins) is mute, but confident. She has a routine life but is willing to make herself heard when necessary, standing up to the men that surround her at the top secret facility where she works as a cleaner. She does this by being a subtle nonconformist. Her best friend, closeted gay artist Giles (Richard Jenkins), lives just across the hall and Zelda (Octavia Spencer) is her spirited guardian at work.

One day a scary frowning man, Richard Strickland (Micheal Shannon) brings a new classified item into the facility, they refer to it as ‘the asset’. What they have found in the watery depths of South America is an Amphibian like man (played by Doug Jones – fun fact he is a mime/contortionist/actor who also played the fawn, the scary eyeball monster in Pan’s Labyrinth). The men study and abuse the creature with little regard for his human-like qualities. It is Eliza who is quickly empathetic and loving towards the creature and seeks to set him free.

During the first few sequences of the film I was taken aback by the beauty of the film’s aesthetic. Everything has a dark, watery, green glow. Eliza and Giles’ apartments are homey and fishbowl-like with their large sloping windows which are often being pattered by rain. The secret research facility has a much more austere 1960s steampunky-sci-fi-movie-esk severity, but the watery theme remains which makes so many of the scenes perfect little artistic gems. This look is integral in the world building of the story, rather than del Toro just making a beautiful illustrated storybook. The greens give a sense of otherworldliness but also of nature and the soft encompassing coolness of deep sea.

Reviews of The Shape of Water have applauded the film in being a nostalgic look back at the 1960s whilst still being realistic to the era’s hardships. Women in this world are subservient but that doesn’t mean that they are happily serving the war-making men. All the sympathetic characters in this movie are ‘others’; a disabled woman,a person of colour and a gay character. They are forced to work in roles that aid in their survival but are unsettled in the heavily classed, gendered roles that society has given them. It is through their social standing that they find commonality both with each other and with the monster they discover.

The character of Strickland is a typical ‘bad’ man but he also demonstrates the Cold War era’s biggest fear: others, people that are not, as he describes, as close to god’s image as himself. Strickland has the perfect house, two children and a devoted wife but he himself is shown to be othered through both his heightened inhumane cruelty and by his ‘incomplete’ body (when he loses two fingers to the sea monster).

The commonality Eliza feels with the monster is one at first built on seeing themselves in one another through their inability to speak. They are not however silent characters; these are characters of physical action searching for their place. There are also frequent references to Fred Astaire and Shirly Temple which show that despite being verbally silent, their lives are still filled with music, dance and sound. The film is not scared to add in a lot of extraneous details particularly regarding its secondary characters, which continuously demonstrates how minorities perform small acts of defiance every day.

With the current upheaval of the entertainment industry it’s been a hard couple of months to be a movie fan. That’s probably why I enjoyed this film so much, because it is a movie that is bursting with del Toro’s love of movies. In many ways it is your typical “quirky” film full of characters who whistle and tap their feet but that is just one of its guises. Behind the melancholy fairy tale is a hardness which sets up a world of political realism set against the magic and love. Having a little magic with our reality is perhaps what we need right now to remember why good storytelling will always be a winner.