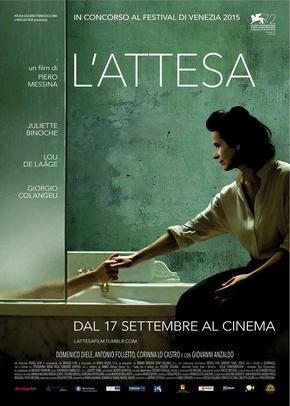 The Wait (originally L’Attesa) is a French/Italian two-hander featuring Juliette Binoche and Lou de Laâge, two generations of talented French actresses, who unfortunately suffer under the weight of simple material that is—seemingly out of necessity—over-directed.

Debut director Piero Messina is young as directors go (he’s in his thirties), and has an eye for intriguing and abstract visuals that could lead to great things. Messina contributed to the screenplay (along with a staggering three other writers), but, as his first big picture after 2012’s Cannes-selected short film Terra, The Wait has only flashes of diamond and none of the substance.

Binoche is Anna, a mother grieving after the loss of her son, Giuseppe (Giovanni Anzaldo). She’s incarcerated by the pain of losing a child, trapped in darkness—a metaphor that blares when we travel from scene-to-scene through pitch blackness, or when watching the caretaker (Giorgio Colangeli) shroud all the windows in her Sicilian villa.

But a glimmer of light opens when Jeanne, Giuseppe’s on-again off-again girlfriend, calls to say that she’s visiting for Easter. Giuseppe invited her, and she’s calling because he hasn’t spoken to her since. In a strange numb stupor, Anna welcomes her, then becomes curious. We see life rekindle in Binoche’s eyes when she finally chooses to deceive Jeanne and pretend that Giuseppe is still alive, a fantasy that ties into the waiting of the film—Anna waits for Giuseppe’s resurrection both spiritually and possibly physically—it’s vague; Jeanne for his return to the villa.

There’s a layer of psychology going on, but not enough plot to last the 100 minutes of the film. Messina seems to become a third actor in many scenes, his direction and the editing of Paola Freddi at times obvious, bringing awareness of their manipulation to the viewer. Long silences between the two women, or when they stare into the distance, cross the line from emotional tension to odd and awkward. When Jeanne watches a helicopter fly into the sky, the sound shoots into our senses, but when the helicopter disappears, the ensuing emptiness identifies little meaning.

The opening titles are worth watching in themselves, an example of Messina’s creative stylisations that don’t quite align with the plot’s simple drama. The scriptwriters took inspiration from works of Nobel Prize-winner Luigi Pirandello, a play and a short story depicting women challenged by and waiting for men. You can see that these references bring another layer of padding to the thin body of the film, but it’s almost to the detriment of the female characters.

One reading, though not to say this was the intention of the filmmakers, is that women are prone to insanity. Though it’s understandable that Anna craves the company of Jeanne, and the only way to keep her there is to keep the charade going, there’s a louder voice in the background of the cinema yelling at her to tell the truth. Would you really lie about a person’s death? The caretaker, in his long disappointed stares, finally takes action in the denouement, but even this action is vague. The inability for these characters to say what they mean and state the obvious is often frustrating for the viewer.

Despite the film’s narrative shortcomings and scenes filled with painfully long pauses, the visual elements, from Easter celebrations in slow motion, to Giuseppe’s scenes in Anna’s head, showcase Messina’s great ability to identify the psychology of his characters with evocative images—a powerful tool of cinema when done well. If the women were better-rounded, the plot taken in a few more directions, this film would be a great calling card to Messina’s name.

One thought on “film review: the wait”